Return of the slugs? 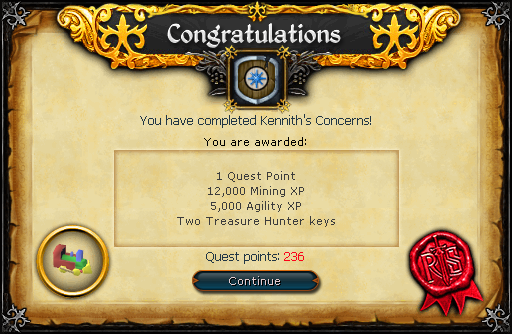 If you talk to the parents of Kimberly, they are at the end of the cave (where you found them mining in the quest), they will ask you to fetch an item from the surface. The items that may be requested are listed below:

The player will receive 2 noted coal in exchange for the item. The requested item cannot be noted. By equipping leather boots and an iron hatchet, the player may bring 2 spades, hammers, tinderboxes and leather boots, and 3 of each other item, and an extra of the item last requested. This will generally yield 30-36 coal per trip. However, as it takes several minutes to reach Kimberly from the south-east bank in Ardougne, players may find it more worthwhile to simply mine coal.

Retrieved from "https://runescape.fandom.com/wiki/Kennith%27s_Concerns/Quick_guide?oldid=21632107"
Community content is available under CC-BY-SA unless otherwise noted.