Start a Wiki
Not to be confused with Kipple.

The Pick and Lute

Before: He looks like a charming piece of work.

After: He's seen things, man. He's been there. You just don't get it. 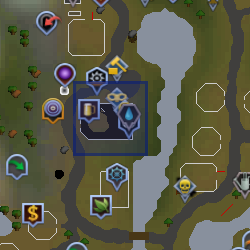 Winston Kepple is one of the many merchants profiteering from the war and a friend of Rolo the Stout. During the player's conversation with him, it reveals that he, like the other pompous merchants, despise the lower classes and enjoys the profits that are rolling in, albeit at the expense of the miserable refugees.

Conversing with him prior to the events of Let Them Eat Pie would reveal the rivalry present between Burthorpe and the White Knights of Falador.

Though he does not play a direct role during the quest Let Them Eat Pie, he is present when Rolo eats the Mouth-watering pie, and seeing the aftermath of its consumption traumatises him so much he is later found shivering on the first floor of The Pick and Lute pub.

Retrieved from "https://runescape.fandom.com/wiki/Kepple?oldid=24564664"
Community content is available under CC-BY-SA unless otherwise noted.