Kethsi is a hidden plane discovered on 14 June 2011. Players can reach it via the fairy ring system using the code DIR followed by AKS. It has been hinted that the city has been destroyed for a few millenia already, as examining the collapsed statue next to the wall design results in "It's been examining the ground for a few millenia.". This would mean Kethsi was destroyed in or before the God Wars.

On 7 October 2010, the 44th Postbag from the Hedge was released. It included a journal hinting at new updates, including Herblore Habitat and Do No Evil. The final hint said:

Origins lie in ruined Kethsi, but now they return from the stone prison to lay waste . The strong remembers, the weak falls.

The coordinates lead to a point just west of Zemouregal's fort. "The strong" is a singular noun, making it likely that it refers to Robert the Strong, who fought the dragonkin in the Fourth Age. Also, the Dragonkin were imprisoned, and in the epilogue after While Guthix Sleeps it is revealed that they desire to lay waste to the world.

The only entrance to Kethsi is a Fairy ring located to the very south-east corner of the area. Just north of it, there are some ruins, with a wall in the middle with a mural on it. It shows dragonkin, if you can see by the legs and feet, destroying a city. It is unknown whether this has been drawn on the wall before or after Kethsi was destroyed, which makes it impossible to know whether the mural is about Kethsi or another city.

On the opposite side of the mural is some rubble, and upon searching it a Tetrahedron 4 can be found for which here is no known use.

On the first floor to the north, a wall design can be seen. When investigated, it shows four different columns which do not seem to fit together without intermediate pieces. One of the symbols on the columns look like an upside-down Dorgeshuun goblin insignia. There is a statue next to the wall design, which when examined says "It doesn't look like it's meant to be human."

At the southernmost part of the first floor there is a ledge which can be jumped across at level 77 Agility. Players must have 77 Agility and it cannot be boosted. To the other side of the ledge is another statue, similar to the one at the first side of the ledge, but with its left arm missing. A little to the north, there is a wooden plank which seems to partially cut through at height of the first floor's ground. It cannot be bypassed with any known items. The placement and odd flatness to the plank suggests it may be used to span the gap between you and it.

To the north of this separated area, behind the plank, is a small platform with an "Unusual anvil", with the examine "I may be able to make unusual things on it.".

Also, if you stand at the spot 1 east of the statue next to the wall design and go 4 south you'll hear some strange noises. One of these noises sound like a Spirit Plane portal, from the Summer quest series. 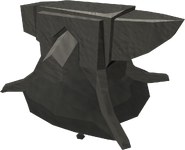 An Unusual anvil, as seen on the first floor of the main hall and further along the islands.

One of the statues found on the second floor on the first island, missing an arm.

The wall design with the intact statue and a collapsed statue next to it.

An birds-eye view of the main hall of Kethsi.
KethsiStatue.png
A closeup of one of the statues
Click an image to enlarge

There is also a ladder which leads to the first island north of the main hall, which leads to a rope swing, behind which is a much bigger area. To the east of this is a pickaxe stuck in a rock, next to a mineable rock close to it. Behind there is a pipe which has an option to crawl through. The mineable rocks also have an "Investigate" option. Behind this rock mass is an enclosed, seemingly empty area only about 13 squares big.

There is also a Wall jump just east of the first ladder down, which seems to lead nowhere. It has an option to run up the Wall jump, but it is not known where this would lead.

To the west of the rope swing there is another anvil looking identical to the Unusual anvil on the first floor of the main hall. A fairly long distance to the west is another building of two floors high, with two ladders in it. There seem to be either parts of a ledge or hand grips at this building. Because of the limited view, it is not known what these are attached to. South of this building is another which is also two floors high. South of this is a staircase which goes underground, and south of that is something which seems to be a ledge leading to a small island which is empty other than some ruins, a tree and another searchable rubble. 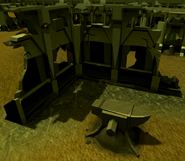 The other Unusual anvil in the inaccessible area of Kethsi.

The westernmost building, which is partially cut out due to horizon limitations. 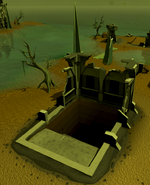 The stairs leading down, as seen on the far west side of the area. Behind it is something that seems to be an agility obstacle similar to balance logs. 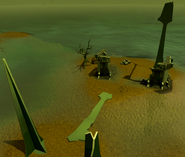 Run up wall jump.
Click an image to enlarge

Kethsi
Retrieved from "https://runescape.fandom.com/wiki/Kethsi?oldid=4411192"
Community content is available under CC-BY-SA unless otherwise noted.