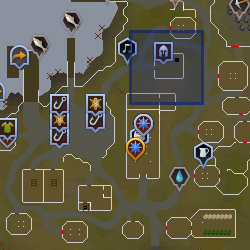 Kharshai is a Mahjarrat who was lost for centuries, unaware of his own identity. During the events in the miniquest Koschei's Troubles, it is revealed that he had been disguised as Koschei the Deathless. He is notable for following neither Zaros nor Zamorak by his own volition at the present time. Due to his time as a Fremennik, Kharshai's appearance has been slightly altered.

Like the other Mahjarrat, Kharshai lived on Freneskae, the realm of perpetual warfare, along with many other tribes. Here, they would live to survive the elements and the destructive power of the legendary "Mother Mah", an Elder God that created their race and whom they would prevent from wreaking havoc on Freneskae through the Rituals of Rejuvenation and Enervation, although at least one Mahjarrat regarded her as a mere myth and the rituals as superstitious traditions.[1] Due to the constant conflict with neighbouring tribes such as the Mahserrat as well as the frequent sacrifices at the Rituals, the Mahjarrat tribe never counted more than a few hundred members and was ruled kratocratically.[2]

In the Second Age of Gielinor, however, the two demi-gods Icthlarin and Amascut travelled to Freneskae in order to recruit the Mahjarrat to fight the Zarosian invaders of their homeland, the Kharidian Empire, in the Kharidian - Zarosian War. Some Mahjarrat opposed the proposal while others agreed to go, causing a large battle to break out. Both Azzanadra and Temekel argued that the Mahjarrat should go with Icthlarin and Kharshai was one of the most excited at the prospect of leaving Freneskae, as Gielinor is a much kinder realm than Freneskae was.[3]. Eventually, after the death of Salisard and the sacrifice of Abrogal, those in favour of travelling to Gielinor emerged victoriously and the entire Mahjarrat tribe accompanied the two gods to Gielinor.[2][3] There, Kharshai aided the Menaphite warriors in driving back the Zarosian army, with success. During this time, they were known as the Stern Judges of Icthlarin.

However, as the Menaphites had almost ensured their victory a couple of years later, the Mahjarrat Sliske, who had got into a feud with Icthlarin over his methods in battle,[4] approached the Zarosian legate, a Chthonian demon named Duke Ceres, and made arrangements to desert the Menaphites and join Zaros.[5][6] Most of the Mahjarrat convened at the fortress of Kharid-et and soon emerged, joining arms with the Zarosians, proceeding to slaughter the retreating Menaphite armies.[7] The god Tumeken, father of Icthlarin and Amascut, swiftly interfered by sacrificing himself, his armies and half of his empire to repel the Zarosians; he used his powers of fire to create a massive explosion, turning half of the empire into a desert wasteland as well as obliterating his own army and most of the Zarosian one. Of the approximately five hundred Mahjarrat present, less than a fifth survived the explosion thanks to Azzanadra, who quickly erected a magical barrier as protection. Kharshai was amongst those to survive and join the remainder of the Zarosian on the march to Forinthry.[7] He was given the rank of tribune in the Army of Zaros.[8]

At the end of the Second Age, a treacherous plot formed by Zamorak was brought into action. With many allies, amongst whom Mahjarrat such as Lucien, Zemouregal, Enakhra and Hazeel, and godly artefacts (the Staff of Armadyl and the Stone of Jas) at his hand, Zamorak and his following stormed Zaros' fortress, where the former battled the god himself, the latter's bodyguards being distracted by Zamorak's men. By pure luck, Zaros was impaled by the Staff of Armadyl and was banished to another realm, leaving Zamorak victorious and more powerful than ever. He was banned from the plane by the other gods, but soon returned, now a god himself, and the God Wars erupted, which started with an extermination by Zamorak and Saradomin of every reminder of Zaros. The Mahjarrat split into two factions: those that followed Zamorak, and those that remained loyal to Zaros, which were no less dangerous, with immensely powerful examples such as Azzanadra and Sliske. This created a rift between the former allies and the Rejuvenation Rituals would, from then on, be based on a Zarosians v. Zamorakians battle.

It was most likely due to these events that Kharshai, witnessing the treachery his kin was capable of, decided that balance was to exist to maintain peace between the Mahjarrat. Being neutral, Kharshai soon started to play a lesser and lesser role amongst the Mahjarrat, until he eventually became but a background character, in fear of becoming the next sacrifice. According to the second set of Zemouregal's notes, Kharshai was of average power and temperament and survived by going with the majority during the rituals. Although Kharshai managed to avoid being sacrificed through this method, it left him with no close allies, which Zemouregal deemed a potentially dangerous situation in future rituals.

Attack and going into hiding

At some point Kharshai started experimenting with a mineral, 'bane'. He wanted to see if it could be enhanced and used to make a fearsome weapon, and discovered that it could be tuned to be particularly harmful to a certain type of creature. Using this, Kharshai forged a heavy and powerful battleaxe, which he named Balmung, out of bane. He decided to "tune" it to Dagannoth, aggressive aquatic creatures, but to do so he needed a part of a creature's body. As such, Kharshai then set off on a small ship from The North to the Fremennik Isles to collect some blood.

On the way, he was attacked by an assassin at sea. According to Kharshai, he could not identify his assailant, but the battle was intense enough to destroy his entire ship. As the fight raged on, Kharshai panicked, fearing that he would be captured and sacrificed. He transformed into a human using his shape-shifting abilities. Knowing that he would still be traceable by other Mahjarrat, even though he was disguised, Kharshai erased his own memory and quickly created a toy ship with the indication that he is a Mahjarrat so that he could remember who he was should he later need it. Unaware that he is a Mahjarrat, his kin would be unable to locate him. His attacker had eventually been driven off in the battle but not before branding the symbol of Zamorak on Kharshai's naked chest. Unconscious, and his mission incomplete, Kharshai drifted off and, according to Chieftain Brundt, was found leagues away from the nearest ship or shore. Unwilling to let the seaborne stranger die needlessly, Brundt brought the shaken Kharshai to Rellekka when he was out at sea, while the unfinished balmung axe came into the hands of the royal family of Etceteria, one of the Isles of the Fremennik.

It is unknown how long Kharshai's body was at sea; he could have been there from the era of the last Rejuvenation Ritual to the time when Brundt found him. Unable to remember anything, Kharshai merely tried to mutter his name, which the Fremennik interpreted as "Koschei." Koschei was taken care of by shoemaker Yrsa, and, impressed by his sudden recovery from his miserable state, the Fremennik dubbed him Koschei the Deathless. After being integrated into Fremennik society, fighting Koschei became one of the trials young Fremennik have to pass to achieve adulthood. Koschei was placed in an underground arena and, to win Thorvald the Warrior's vote, young Fremennik from then on had to pass his test on bravery and fight Koschei to the death (they would, of course, not be killed, but the point was to show no fear of death). Kharshai's plan had worked, for his existence was lost to the other Mahjarrat. Azzanadra, a Zarosian Mahjarrat imprisoned during the late God Wars, mentioned that, when he escaped the Jaldraocht pyramid, he was unable to detect Kharshai. In his own words: Kharshai may yet live, I can sense no trace of his death upon this world, but nor can I sense his pulse; perhaps his neutrality has earnt him a prison such as mine was.[9]

By 169 of the Fifth Age, Koschei's lack of memory had begun to trouble him. After the eighteenth ritual that had occurred that year, his mind kept being bugged by images of a blossoming tree south of Rellekka. He tried to chop it down, but to no avail. Koschei addressed the adventurer who had fought the dagannoth to bring their balmung axe that they had received from Queen Sigrid before the battle, and chop down the tree. They succeeded and found a strange chest without a keyhole. By mere touch, Koschei unlocked it to reveal a toy ship within. It was written on the sail that Koschei would "feel in his bones when the time has come".

After being exposed to water, the ship opened to reveal a white gem in a compartment. Upon touching the gem, Koschei's memories magically returned to him. He remembered everything that had happened and transformed into his Mahjarrat form, finding out that his long time as a Fremennik has permanently altered his appearance. Within seconds, Enakhra arrived to the scene. Now able to sense him again, she claimed that she came to check if it was truly Kharshai she had felt. Her Zarosian rival Akthanakos arrived momentarily, supposedly for the same reason, but both knew that they wished to claim Kharshai for their respective faction. A furious Kharshai demanded that they depart instantly, proclaiming his desire for balance. The Mahjarrat warned him not to count on the gods' support in the future and reluctantly teleported away.

Kharshai's voice
Kharshai explains what he has been up to.

Before recovering his memories, players fight Kharshai in the form of Koschei as part of The Fremennik Trials quest. Although he has four attackable stages, the player can win a vote by simply defeating him three times because the test is about bravery and not about strength.

Retrieved from "https://runescape.fandom.com/wiki/Kharshai?oldid=16787654"
Community content is available under CC-BY-SA unless otherwise noted.