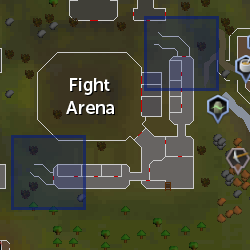 Khazard Guards can be found guarding the north-eastern and south-western doors of the Khazard Fight Arena. During the Fight Arena quest, they prohibit players from entering the arena unless they disguise themselves as a member of Khazard's Army by wearing a khazard platebody and khazard helm.

After the quest, they will prohibit players from entering regardless of whether or not they wear Khazard armour, recognising them for killing either Khazard or Bouncer.

Retrieved from "https://runescape.fandom.com/wiki/Khazard_Guard_(door)?oldid=25381315"
Community content is available under CC-BY-SA unless otherwise noted.