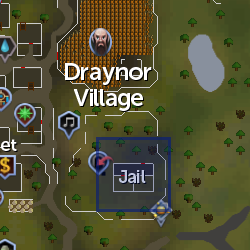 Khnum (pronounced Noom) is an Al Kharidian and current leader of The Skulls, a gang operating in Draynor Village. He is rather fat and has a love for food, even willing to give information when threatened not to get fed which he would never give otherwise, even under torture.

Khnum used to be an Al Kharid palace guard. One day, he caught the young Ozan, who'd lost both his parents and was henceforth forced to live a life of petty thievery, stealing something, the only guard to ever have so. Instead of arresting Ozan, Khnum talked to him and they became friends, often seeing each other.

One day, however, Ozan stole a large ruby from a gem trader on the market, but was caught. He ran through the town, pursued by the trader and guards, until he found himself stuck in an alley, where Khnum was waiting for him. He didn't know that Ozan was the reason of the commotion and they talked for a bit, mostly about the new Captain of the Palace Guard, Osman, until Ozan heard a singing voice coming from the palace and decided to follow it. He appeared in the room of the singing Leela, unbeknownst to him Osman's daughter, attracting all guards's attention and forcing him to flee. Unable to go down due to the presence of many guards, including Khnum, Ozan went up and accidentally entered the room where the Kharid-ib, a legendary diamond, was kept. Osman caught him there and, being accused of attempted theft, he was banished from Al Kharid. Without saying goodbye to Khnum, he left, something that Khnum would hold against him later.

Osman fired Khnum after twenty years of service for supposedly letting Ozan in, which was not true of course. Therefore Khnum left the town and travelled to Draynor Village, where he set up a gang called "The Skulls". In 169, a mysterious woman named Lady Keli approached him and hired his gang to help with the kidnapping of Prince Ali of Al Kharid. Khnum agreed, being able to complete a large job as well as wreak his vengeance on Al Kharid. He sent three of his mercenaries, led by Joe, to aid. He was, however, caught by the now grown-up Ozan and an adventurer during Stolen Hearts, and they, along with Leela, got the information on the kidnapping out of him. They confronted the party that was about to leave with the prince, but failed to save him, instead having to kill Joe and his men, due to a mind control spell cast by Keli. Khnum remained in the Skulls HQ, the former Draynor Jail.

After Stolen Hearts, he can be spoken to to acquire one of a selection of bandit titles.