He hears no evil.
Before Do No Evil 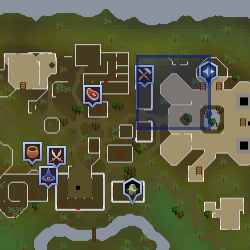 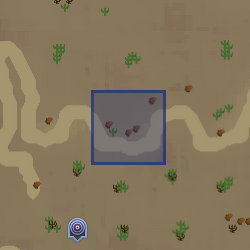 Kikazaru is one of the three wise monkeys who reside in the Temple of Marimbo. He interacts with the player as one entity with Mizaru and Iwazaru, and they help players during the Monkey Madness quest and Freeing King Awowogei subquest of Recipe for Disaster, where they guide the player in making a stuffed snake for Awowogei. In Do No Evil, the monkeys assist the player in establishing a monkey colony in the desert. During the quest it is revealed that he lost his senses as a side effect when Amascut stole Apmeken's hearing.

Kikazaru is deaf but he overcomes his disabilities by co-operating with the other wise monkeys and communicating via sign language with them. This co-operation allowed them to escape the massacre of the desert monkeys carried out by Leeuni, Ayuni, and Eruni at Amascut's command.

He along with the other two wise monkeys are important figures in the quest Do No Evil where the player reminds them about their goddess Apmeken and they charge the player into bringing monkeys back the desert, which the player does, taking them as well.

Retrieved from "https://runescape.fandom.com/wiki/Kikazaru?oldid=25380632"
Community content is available under CC-BY-SA unless otherwise noted.
... more about "Kikazaru"
RDF feed
Is members only
Yes +
Store location
+