The King Black Dragon (named Shakorexis by Hannibus) is an enormous, three-headed black dragon. He was the second dragon ever, created by Kerapac's fellow dragonkin Phalaks; a failed project intended to replicate the powerful Queen Black Dragon[1] some time in or before the First Age. One decade later, he was released into the Wilderness.

Killing the King Black Dragon at least once is one of the requirements of redeeming the Dragonkin lamp from Mr. Mordaut.

The King Black Dragon can be killed to collect the soul of a black dragon in an ushabti.

Obtaining all of his unique drops is required for the title [Name] the Last Rider.

There are two ways that players can reach the King Black Dragon's Lair. Note that the lair itself is not considered part of the Wilderness, and therefore there is no risk of being killed by other players.

The Third dragonkin journal reveals that another Dragonkin (now known as Phalaks) created the King Black Dragon after seeing Kerapac's Queen Black Dragon. Although Kerapac noted that he was much smaller, he surmised that they could be used for breeding strong dragons which were immune to Jas' curse. The Fourth dragonkin journal mentions, however that the new dragons were too "bestial" and "broken", so the King Black Dragon was released into what would then be called the Wilderness.

Sometime after being left alone, the white dragon Therragorn came to him. They became friends, and Therragorn asked him to hide her from hunters, who were killing off the white dragons for armour. He assisted by hiding her in some ruins south-east of the Rogues' Castle, which he could hide from view.

A Visit by Bob and Neite

The following takes place during A Tail of Two Cats.

The following takes place during One of a Kind.

Hannibus, freed by an adventurer, desired to return to his home planet of Iaia. However, he had no idea on how to do so, as he did not want to get involved with the gods again, nor could teleportation and fairy rings bring him back home. Hannibus accompanied the adventurer by looking into both the mysterious statues and dragons themselves, but did not find any result. Hannibus suddenly remembered about his old mount and the two went to the lair that he resided in.

Hannibus greeted his former mount, before the King Black Dragon noticed the adventurer alongside him, either recognizing them from previous encounters or as food if they had not fought before. Regardless, Hannibus asked him about a white dragon, which he affirmed he knew and took them out to the location where he hid Therragorn. His presence ensured that the two would not be attacked, and upon arriving, unlocked the entrance with a Dragonkin phrase before leaving.

A group of players fighting the dragon as depicted in art

Concept art of the updated dragon 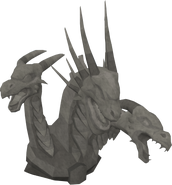 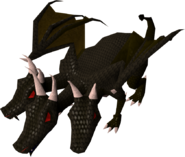 The King Black Dragon, prior to his graphical update.
Click an image to enlarge

Retrieved from "https://runescape.fandom.com/wiki/King_Black_Dragon?oldid=27476745"
Community content is available under CC-BY-SA unless otherwise noted.