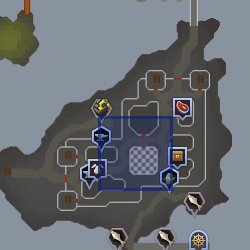 King Gjuki Sorvott IV, or simply known as King Sorvott, is the current ruler of the Fremennik island settlement of Jatizso. King Gjuki is the fifth king of the island and the fourth in the Sorvott line. His name used by field operatives is Big Daddy.[1]

King Sorvott plays a large role in The Fremennik Isles quest, which deals with his rivalry with the neighbouring nation of Neitiznot.

King Sorvott IV was born to King Sorvott III and his wife. When he was young, his father taught him how to manage the island's economy and trade. The young Sorvott possessed a strong interest in market, but overall seems to have absorbed little of his father's teachings.

Sorvott IV, like every king of Jatizso before him, harboured an intense hatred for the neighbouring island of Neitiznot. Neitiznot, which was founded several hundred years ago by the Fremennik King Neitiznot, had possessed a violent rivalry with Jatizso since its establishment. Sorvott IV was taught what were largely untrue stories of Neitiznot brutality, and his aggressive nature only heightened his dislike of his neighbours.

In his early manhood, his father passed away, and his mother died at an undetermined time as well. This left the throne to the young Sorvott IV, who would use his power to wage war against his neighbours.

Sorvott, since coming to power after the death of his father, King Gjuki Sorvott III, has received incredibly poor public reception, his people largely attempting to flee Jatizso for the city of Rellekka in the mainland Fremennik Province. He has become engaged in two wars: the War of the Fremennik Isles and the Fremennik - Ice Troll War. He is arrogant and paranoid, caring more about defeating his cousin Mawnis Burowgar than being a wise ruler.[2][3] He makes use of a vast spy network, having agents in Neitiznot and Al Kharid.[4][5]

His penchant for increasing tax and inventing new taxes to sponsor the futile wars against the ice trolls to the north and Neitiznot to the west led to the gross mismanagement of his nation's economy and a state of near-permanent bankruptcy. As a result, poverty and widespread unhappiness are rampant among his subjects.[6][3][7] He views his subjects as a source of income, considering it to be their duty to fund his projects.[8][9]

He has a low opinion of his cousin and ruler of Neitiznot, Mawnis Burowgar, frequently referring to him in belittling terms.[10][11] He is convinced that his cousin is a tyrant whose every action is made to undermine him.[12][13]

Due to the rise of the ice trolls, he reluctantly agreed to a truce between the Fremennik Isles, but before long he hired an adventurer who had been granted a Fremennik name, employing them to spy on his cousin and find out their plans. He also ordered the adventurer to act as a tax collector, taxing his citizens further based on their windows and facial hair. When he learned that the adventurer had also been helping his cousin prepare for the final push to defeat the Ice Troll King, he had them arrested, accusing them of aiding Neitiznot's attempts to conquer Jatizso. The adventurer, by this point fed up of the king's arrogance and stubbornness, snapped, stating that if anybody was going to destroy Jatizso, it was him, and that the army of Neitiznot were fighting to repel the ice troll threat. The king immediately had his soldiers amassed and launched an attack upon the ice trolls himself, convinced that his cousin only wanted the glory of slaying the king. He refused to consider supporting his cousin and had a decree issued stating that any interference would constitute an act of war. However, he and his soldiers failed to slay the Ice Troll King, as the adventurer acting under Mawnis Burowgar slew the troll.

Retrieved from "https://runescape.fandom.com/wiki/King_Gjuki_Sorvott_IV?oldid=24927558"
Community content is available under CC-BY-SA unless otherwise noted.