Start a Wiki
CSOS
Not to be confused with Lanthus or Luthas. 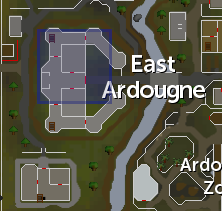 King Lathas Ardignas was the king of East Ardougne, the capital of Kandarin. Sons of King Ulthas, he and his brother Tyras are responsible for the division of the city between West and East.[1] Lathas rules the eastern part of the city, although the existence of the Ardougne City Council leaves the extent of his power uncertain. He and his brother are the great-grandsons of the first King of Kandarin, who founded the kingdom after the Great Battle, leading the Ardignas bloodline to rise to power.[2]

After Tyras departed on a journey to the elven land Tirannwn, Lathas put West Ardougne under quarantine to protect its inhabitants from a terrible plague that he claimed had broken out. He also appointed a large group of healers nicknamed mourners to take care of the city and its residents, making them the effective rulers instead of the city warder Bravek.

Unlike his father Ulthas, Lathas was not a particularly popular king. For example, convicts have spoken negatively of the "justice of King Lathas."[3] He is also known to have pardoned criminals' sins in exchange for payments towards public works.[4] The king is a middle-aged, bald man with a brown full goatee and he can be found on the first floor of the castle in East Ardougne, just on the western bank of the River Dougne.

Lathas was born some time in the second century of the Fifth Age to his father, King Ulthas. There are no details on his childhood available, but it is not unlikely that he spent it with the Royal Family in Ardougne.

In 132, King Arthur and his Knights of the Round Table arrived to Gielinor from the realm of Britain and sought residence. The wealthy nobleman Lord Sinclair, in agreement with King Ulthas, granted them his own castle Camelot, while he and his family moved into a smaller mansion nearby, to his children's great dismay.[5] For reasons currently unknown, Lathas would come to bear a deep hatred towards the knights of Camelot, although he kept this secret.

After their father died from a hunting accident four years later, Lathas and Tyras, both heirs to the throne, decided to split the city of Ardougne between them, dividing it in two parts.[1] Lathas became king of East Ardougne, which contained the famous market as well as a popular zoo. Meanwhile, King Tyras would soon depart on a journey to the other side of the Galarpos Mountains along with most of his army, leaving the ruling of West Ardougne in the hands of City Warder Bravek.

Dealings with the Iorwerth Clan

Some time after Tyras' departure, Lathas was contacted by the Iorwerth Clan, a malevolent family of elves who had started a civil war at the end of the Fourth Age and were now trying to return a mysterious entity known as the Dark Lord to RuneScape. In order to get a foothold in the human lands, the Iorwerths requested his aid in their plans, asking to be allowed access to West Ardougne, convincing the king that Lord Iban, a Kinshra officer who had been resurrected after dying in battle and taken over the Underground Pass, preventing it from being used to travel between Tirannwn and Kandarin, posed a serious threat. In return, they promised King Lathas to help him in the downfall of Camelot.[6]

West Ardougne was subsequently surrounded by a high and thick wall, thus completely isolating it from the outside world. The mourners kept the citizens believing in the plague by creating fake symptoms and even making Farmer Brumty's sheep outside the city look ill as well.[7] Even as the Death Guard discovered the Temple of Light beneath the mountains and began abducting alleged plague victims to use as mining slaves, King Lathas continued to keep up the hoax.[6]

Plans with the Outpost

In 169, King Lathas ordered the demolition of a historic Outpost north of West Ardougne, at the site where the Great Battle had taken place, in favour of his planned laboratory for a party of alchemists composed of Effigy, Transmute and Currency.[8] Its caretaker, a scholar named Jorral, asked for an adventurer's help in convincing Lathas to leave the building alone by uncovering its history.

They agreed to help and learnt of the history of the Outpost, Kandarin and the Ardignas bloodline by consulting various sources that Jorral had suggested. The latter proceeded to summarise the Outpost's history in a letter to the king, in addition to his plans to turn it into a museum, before asking the adventurer to deliver it to him. After reading the letter, King Lathas was impressed by the Outpost's historical value and agreed to have it become a museum.

Some time later, the East Ardougnese woman Elena, who had been regularly helping "plague victims" in the west, came close to discovering the plague did not exist. As a result, the mourners swiftly locked her in a secret prison. Her father Edmond subsequently enlisted an adventurer's help in rescuing her, the same as the one who had saved the Outpost, which they did successfully with the help of Bravek and the Rehnison family. Once Elena was safe, the adventurer helped her and her friend Guidor with the research, conclusively proving that the plague was fake.

The adventurer confronted King Lathas with this, who confessed that he had indeed lied about the plague. However, he told the adventurer that he was, in fact, protecting his people from a greater danger, stating that Tyras had been captured by the Dark Lord while in Tirannwn and subsequently forced to drink from the Chalice of Eternity, being corrupted and allying with the Dark Lord in the process.[9]

The adventurer believed this story, to which King Lathas tasked them with dispatching his own brother. First, they would need to gain access to the elven lands by clearing the Underground Pass. With the help of the guide Koftik, they learnt how to defeat Lord Iban after venturing through the Pass for a significant amount of time, and managed to destroy his soul by throwing a doll bearing the elements that had been used to resurrect him into the Well of the Damned.[10] Lathas proceeded to send a couple of wizards to the ruins of Iban's Temple in order to remove his taint from the Well of the Damned, soon restoring the Well of Voyage, allowing access to the western lands once more.

The following takes place during Regicide.

After being informed that the Well of Voyage was fully operational once more, the king sent a messenger to the adventurer to inform them of this. Lathas asked them to venture to Tirannwn, make contact with the elves there and kill Tyras, whose camp was somewhere in the southern part of the Isafdar woods. They complied and journeyed through the Pass once more to find themselves in Tirannwn, where they were approached by Idris, an elf who was shocked to see a human. Idris was swiftly assassinated by two other elves, Essylt and Morvran, who instructed the adventurer to find Lord Iorwerth in his camp, saying that King Lathas had informed them of their arrival.

With some help from Iorwerth's tracker, the adventurer managed to locate King Tyras' encampment, hidden in the forest. His general, Hining, would not let them meet the busy king, however. Lord Iorwerth then suggested using an exceptionally volatile substance called fire oil to kill Tyras from afar and provided them with a book with instructions. The adventurer succeeded in creating such a bomb and, after distracting the Tyras Camp's catapult guard, launched it into the king's tent, causing a large explosion and killing Tyras on impact.

Lord Iorwerth gave them a sealed message to return to Lathas when the adventurer reported back, and gave them permission to use the Arandar pass over the mountains. Just outside Ardougne Castle, however, they were intercepted by Arianwyn, a cloaked elf who claimed to have seen all their actions and who unsealed the message for them. It informed Lathas that the path for the Dark Lord's return had been cleared with Tyras' death and that Camelot would soon fall. Arianwyn informed the adventurer that they would now serve as a spy on the inside for the rebel elves fighting the Iorwerths and advised them to deliver the message to Lathas to maintain his trust. The king was contented to receive the message, oblivious to the fact that they were aware of his betrayal.

After discovering the true nature of the plague and the plans of Lord Iowerth and King Lathas to kill the entire population of West Ardougne, a group of citizens led by the adventurer overthrew the mourner headquarters. When confronted by the knights of Ardougne the revolution provided a proclamation by Councillor Halgrive resulting in the knights returning to the castle. When they learn of King Lathas' plans for West Ardougne from Councillor Halgrive, the knights attempted to take Ardougne Castle for the Council and revolution, being supported by the heroes and led by Sir Edmond. They faced opposition from the paladins and warrior women of Ardougne, led by Sir Hugo, who supported King Lathas. The battle was quickly won by the revolution and Sir Hugo was killed defending King Lathas. King Lathas admitted his intentions and threw himself at the mercy of the adventurer who chose to execute or exile King Lathas. Even if the adventurer chose to spare him, he was later killed in his exile by the Dark Lord, who consumed his soul.

After the battle the Knights of Ardougne occupied West Ardougne and drove out the Mourners so that rebuilding can begin, while Thoros, cousin to Lathas ascended to the throne as King of Kandarin.

Retrieved from "https://runescape.fandom.com/wiki/King_Lathas?oldid=24927514"
Community content is available under CC-BY-SA unless otherwise noted.