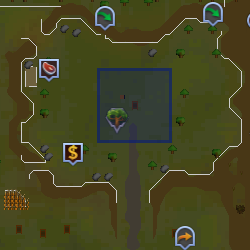 To help expand the gnomish empire, Narnode has sent many explorers to discover the unknown, along with ambassadors to create relationships with the humans and dwarves.

He is also one of possible customers in the Gnome Restaurant minigame.

The following takes place during The Eyes of Glouphrie.

Several strange cute creatures arrived at the Gnome Stronghold, who were taken in as pets by the populace due to their cute appearance. King Narnode would personally take one of these pets in. When the adventurer visited Brimstail, they set out to learn and use Oaknock's anti-illusion device when it was damaged by an unknown force. The adventurer repaired and reactivated the machine, revealing the cute creatures to be Evil creatures. Narnode was informed of the situation by the adventurer and tasked them to clear the Gnome Stronghold of the evil creatures, and wondered why the Arposandran gnomes were spying on them. As a reward, he gave them a crystal seed.

The following takes place during The Grand Tree.

In the year 169 of the Fifth Age, Narnode began to worry over the health of the Gnome Stronghold's spirit tree, who was dying from an unknown affliction. He recruited a passing adventurer to help him solve the problem, and directed them to the Tree Guardian Glough. Upon learning that the tree was dying from daconia rocks, the adventurer became suspicious of Glough and investigated his house, only to be arrested and imprisoned. Narnode personally freed the adventurer and upon learning more from Glough, told them to stay away for their own safety while he began to prepare for war.

The adventurer, persistent on solving the problem, eventually found a secret passage into the underground system which Narnode had showed them at the start of the quest. Glough confronted them with a black demon, but the adventurer slew it with ease. Narnode soon arrived and learned from them that Glough had used his secret passage to sicken the tree, and sent guards to investigate. Upon learning that Glough was responsible for harming the tree, he apologized to the adventurer and rewarded them with access to the underground mine after all the daconia rocks were removed.

Upon learning of Glough's treachery, King Narnode sent the 10th Squad to inspect the shipyard where Glough was building his warships. However, they mysteriously disappeared, and Narnode tasked the adventurer with finding out where they went, giving them a Gnome royal seal to show that he had authorized them to help in the investigation. The adventurer soon investigated and informed him that they were now a member of the 10th Squad and that they were all alive, but a few imprisoned on Ape Atoll. Narnode personally rewarded the player for their efforts.

Retrieved from "https://runescape.fandom.com/wiki/King_Narnode_Shareen?oldid=24927451"
Community content is available under CC-BY-SA unless otherwise noted.