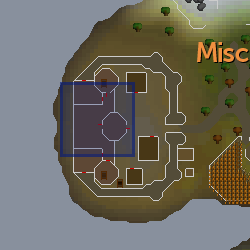 Heir to the throne of Miscellania.

King Vargas is the king of the islands of Miscellania and Etceteria. He was turned into a yeti, which made him unsuitable to rule as king, and therefore he attempted to find a regent. The player then rules in his stead as regent after completing the Throne of Miscellania quest.

He seems to be possessive of his land, and without the player knowing it, he seems to try to take back his land. He also occasionally makes decisions for the player when he/she is not there.

During Throne of Miscellania, the player has to act as a diplomat between the two fragile nations of Miscellania and Etceteria. Afterward, a treaty from Queen Sigrid will be given to King Vargas. Because of his yeti-like features (not to mention size), he cannot sign the treaty with a normal pen. The player must then get a giant pen nib from Derrik and attach it with some logs to make a giant pen for the king.

During Royal Trouble, he has an argument with Queen Sigrid and declares war on Etceteria. After the quest, the player finds out this is all a big sham, plotted by some teenagers from Rellekka wishing to complete their trials for adulthood. The player must then give King Vargas a letter from Queen Sigrid. He doesn't expect what Sigrid wrote to him, as she hinted dating him after he is cured from his yeti state. The quest will end and he will give the player a reward.

The method of how Vargas became a Yeti was revealed in the quest, Glorious Memories. During the cutscenes in the quest, he is the younger version of King Vargas called Prince Vargas. He is human at first, but then it is revealed that the attack of a Gnoeals caused him to turn into a yeti. Only a little of it got on Prince Vargas, so he didn't immediately turn into one. Managing to fight the curse for several years, he finally succumbed to it and became a yeti. He is later cured when the player gives him a yeti curse cure during the quest. The player remains his regent as he wishes to go back to adventuring. He also received a graphical update (the update was for his Yeti form; his human form is entirely new). After Glorious Memories, Baba Yaga will tell a story about King Vargas.

In Blood Runs Deep, he is found trapped in Waterbirth Island and the player must guide him to the entrance. He also gets married to Queen Sigrid and loses his children, Prince Brand and Princess Astrid to the Dagannoth Kings. He later moves back into the castle with his new wife and allows the player to still be Regent, saying that they are the closest thing to a son/daughter he has left.

Retrieved from "https://runescape.fandom.com/wiki/King_Vargas?oldid=24927247"
Community content is available under CC-BY-SA unless otherwise noted.