A dwarven maker of gauntlets. 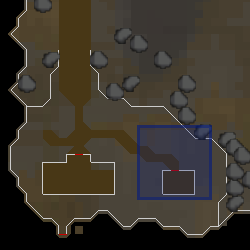 Klank is part of a group of dwarves trapped in the Underground Pass. Although he originally came seeking ore, he has become trapped by the evils of the pass, created by Iban.

Klank gives the player a free pair of his specialist gauntlets during the Underground Pass quest. If lost, the gauntlets must be re-bought for 5,000 coins if the player requires another pair. They are used to search the half-soulless' cages for a dove without being bitten. However, they are more popular for their combat bonuses.

Until the release of Recipe for Disaster, Klank's gauntlets were the strongest gloves in RuneScape.

A quick way to get to him is to teleport to the Death Altar and leave through a door outside the altar.

Retrieved from "https://runescape.fandom.com/wiki/Klank?oldid=24926371"
Community content is available under CC-BY-SA unless otherwise noted.