A rather transparent character. 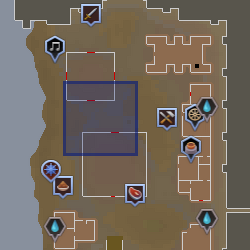 Klenter is a ghost who is located in Sophanem. He was once the high priest of Icthlarin in Sophanem[1], but he died and was buried by means of an embalming ritual.

During Icthlarin's Little Helper, the player was tricked and hypnotised by Amascut the Devourer to infiltrate his tomb and steal one of the Canopic jars containing his organs so that she could steal his soul. When the player tries to leave Klenter's Pyramid after hiding one of her symbols inside one of the sarcophagi, Icthlarin himself breaks the spell placed on them by Amascut and the player wakes up outside the pyramid without realising what they had done.

At this point, Klenter's soul can be seen in the streets of Sophanem, blaming the player for what had transpired (of course, he can't be understood without a Ghostspeak amulet), and everyone in the city (with the exception of the Sphinx) will turn violent towards them for desecrating the tomb. Later, the player manages to enter the pyramid once again (with the help of their cat) in order to return the canopic jar they stole earlier, receiving Klenter's gratitude for doing so.

After this, the High Priest of Sophanem decides to perform a second embalming ritual for Klenter, during which Amascut attacks the priests and the player with a Possessed Priest thanks to the symbol the player had unknowingly placed there before, but she fails and runs away to hide.

By the end of the quest, it is stated by the High Priest that, unfortunately for the Sophanites, Amascut had hypnotised another adventurer (presumably another player starting the quest) immediately after running away from the ritual, to make them do the same things the player had previously done, and for that reason the plagues hadn't been lifted from Sophanem. The High Priest also states that, for as long as she doesn't give up on stealing Klenter's soul, the struggle between Icthlarin and Amascut would continue forever.