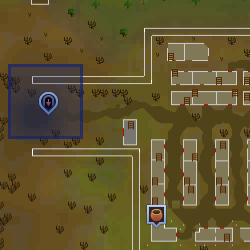 Koftik is an agent of King Lathas in West Ardougne.

During the quest Underground Pass, he acts as a guide through the Underground Pass, teaching those he guides techniques such as using fire arrows and providing them with food. As he descends further, he slowly starts to lose his mind due to the influence of Lord Iban and starts to deteriorate into a half-soulless, though the process is reversed when Lord Iban is destroyed.

During Plague's End, he turns against King Lathas and partakes in the Ardougne Revolution, admitting that he knew the plague to be a hoax. Afterwards, he attempts to set up tours of the Underground Pass, but ends up having a low turnout.

Retrieved from "https://runescape.fandom.com/wiki/Koftik?oldid=24925465"
Community content is available under CC-BY-SA unless otherwise noted.