Kuradal's Dungeon is an area near the Ancient Cavern that is filled with slayer monsters. Players can enter the dungeon only if Kuradal, or her superior, Morvran, has assigned them a slayer task for one of the monsters in the dungeon. Also, Kuradal will not allow players with dwarf multicannons in their inventories to enter her dungeon.

Once in the dungeon, players can only attack the Slayer monster they were assigned, and only while the task has not been completed. All monsters in the dungeon except dark beasts, hellhounds and gargoyles are unaggressive; the aggressive monsters, however, can attack the players, and players cannot retaliate unless the monster is part of the assignment.

The dungeon has three Agility shortcuts:

The shortcuts allows players to get deep in the dungeon without having to pass through as many monster-filled rooms.

If you die on the way out after finishing a task, Kuradal allows you to enter the dungeon to collect your items, even though you don't have a slayer task for monsters in the dungeon.

The entrance to Kuradal's Dungeon is in the Ancient Cavern near Kuradal, who is located in the back of the dungeon, on the opposite side of the whirlpool entrance, and up the stairs.

There are four ways to get to the entrance: 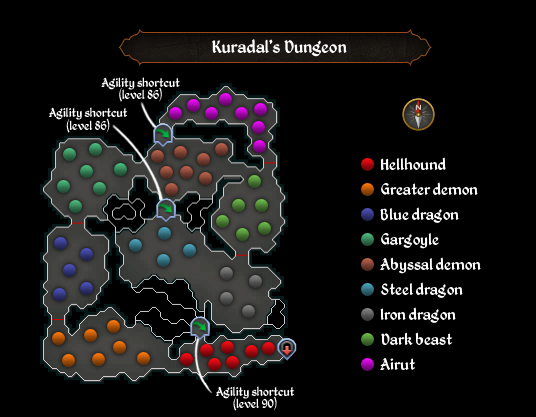 Monsters that can be found in Kuradal's Dungeon include:

Almost every type of monster is separated from other types of monster by barriers in the dungeon. The one exception is that the iron and steel dragons share the same chamber, although even there the iron dragons stay in the eastern side and the steel ones in the west without proper access to each other (blocked by a rock slide). Monsters, players, and familiars cannot attack through these barriers.

All monsters in the dungeon have a chance of dropping ferocious rings. Each ring has the following abilities:

Retrieved from "https://runescape.fandom.com/wiki/Kuradal%27s_Dungeon?oldid=24308551"
Community content is available under CC-BY-SA unless otherwise noted.