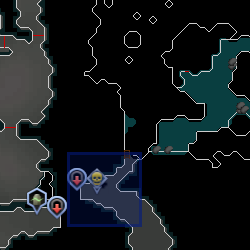 Kuradal is the highest level Slayer Master, the daughter of Duradel, and the current holder and seller of the Slayer cape. She is found in the Ancient Cavern, which requires barbarian training to access. Players need at least 75 Slayer and 160 combat to obtain a slayer assignment from her. She keeps many of the monsters she assigns in a nearby dungeon. The easiest way to reach her is by using a ferocious ring, which teleports directly to Kuradal and may be obtained as a drop from any of the monsters located in her dungeon. Alternatively, she may be reached through the fairy ring network using the code BJQ. However, this fairy ring must first be repaired using 5 bittercap mushrooms.

In Festival of the Dead, she revealed that she would go out at night to slay tougher and tougher creatures to surpass her father when she was a child. She also completed many preparations to bring her father and mother back together before Duradel's death.

This means that an average of 28.8 points are earned per task in each 50-task set.

Kuradal will occasionally offer a special task in place of a regular Slayer task (Note: a player needs to accept the challenge right away, as there are no options to "swap" your task for the challenge if you talk to her after she has given you the task). The player can decline to take the special task without penalty. If the player accepts the special task, completing the task:

Kuradal sells the Slayer Cape of Accomplishment to any player who has achieved level 99 Slayer for 99,000 coins. Previously, Duradel (or Lapalok) sold the cape.

Retrieved from "https://runescape.fandom.com/wiki/Kuradal?oldid=10928255"
Community content is available under CC-BY-SA unless otherwise noted.