Lumbridge, outside the General Store

He has the aura of a lazy-bones about him. 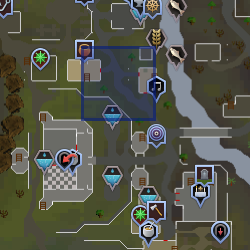 Lachtopher wanders the northern part of Lumbridge, usually outside the General store. He is the good-for-nothing brother of Victoria who once lived on the east side of the River Lum until goblins invaded his house. His house was closest to the border gate of Al Kharid. The other one belonged to either Lozar or William.

Jagex may have included Lachtopher in the game as a way to satirise players that beg, to show new players that begging is not a good way to make money, and that they may face criticism if they do.

He is the first NPC to talk to in the Cryptic Clue Fest of the 2009 Thanksgiving event. Players needed 3 ropes, 2 buckets, and 5 bananas to progress in the event.

Attack of the goblins

Lachtopher is Victoria's brother. He used to live on the east side of the River Lum until goblins attacked Lumbridge, forcing him to move to other side of the river. Victoria decided to take Lachtopher into her house for a couple of weeks, as her mother always taught Victoria to be understanding and kind. He has stayed there ever since.

Lachtopher has lived in Victoria's house for quite a while now and shows no intention of leaving, or even finding another place to stay in. He occupies the ground floor of Victoria's house. When the Battle of Lumbridge broke out, Duke Horacio had Lachtopher's house turned into a shelter for refugees was inhabited by two families. They have since moved to different places, leaving it for the goblins to use.

Retrieved from "https://runescape.fandom.com/wiki/Lachtopher?oldid=24923392"
Community content is available under CC-BY-SA unless otherwise noted.