Start a Wiki
Loading...
NormalValentine's DayAttack of the Zombie Sprouts 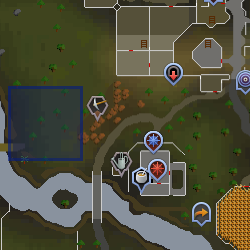 Lady Niya is a woman who can sometimes be found west of the Champions' Guild just outside Varrock or in Burthorpe. She has a twin sister called Evil Niya. She is currently located south-west of Varrock.

During the Spring 2014 Treasure Hunter promotion she had the ability to combine the cloaks of spring, summer, autumn, and winter into the tradeable Cloak of Seasons. On 2 July 2014, players were greeted with the message "Lady Niya has collected up all of the unused Cloak of Seasons components."

During the 2015 Valentine's Day Treasure Hunter promotion she could also be found north of the Burthorpe lodestone, alongside Evil Niya. They both sold old and new Valentine's rewards for varying amounts of rose petals.

During the Autumn 2015 Treasure Hunter promotion she has the ability to combine the pets of spring, summer, autumn, and winter into a Pet of Seasons token, used to unlock the Pet of Seasons.

Niya is also capable of converting any of the four seasonal ingredients into experience (2014 and 2015). 5 experience points are received per ingredient, in the corresponding skill. Given the total of four times 600 a total of 12,000 potential experience (3,000 per skill) is used to create the Cloak and Pet of Seasons.

During the Summer 2016 Treasure Hunter promotion she has the ability to combine the armour pieces of spring, summer, autumn, and winter into the Armour of Seasons. The pieces being gloves, boots, chest, and bottom for each of the sets.

In February 2016 she could be found next to the portal to Alice's Treasure Chamber north of the Burthorpe bank, where she informed players about the Giant Mimic.

In October 2016 she could be found south of Draynor Manor with Evil Niya for the Attack of the Zombie Sprouts Treasure Hunter promotion.

In August 2017 she could be found in Burthorpe for the Oddments Treasure Hunter promotion, allowing access to the Oddments Store. 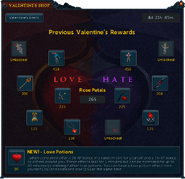 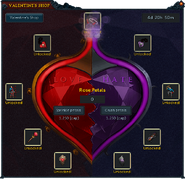 2015 Valentine's rewards
Click an image to enlarge
Retrieved from "https://runescape.fandom.com/wiki/Lady_Niya?oldid=24922998"
Community content is available under CC-BY-SA unless otherwise noted.