This ancient elf appears to be being kept alive by a metal-and-crystal exoskeleton. 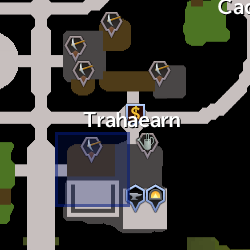 Lady Tangwen Trahaearn is the leader of the Trahaearn Clan of elves, and the eldest of the elven clan leaders. After the Iorwerth Clan coup, Lady Trahaearn went into hiding like the majority of the other clan leaders. She locked herself up in a small cavern in the underground pass, equipping herself in an Exoskeleton designed to slow the process of her aging and fell into slumber, leaving three Trahaearn automatons as bodyguards in the closed off cavern, while she slept in her throne.

During the events of Plague's End, the player manages to find her cavern by mining into a section of the cave-wall south of the Well of Voyage. After dealing with the guarding Automatons, the player inspects her sleeping form to find her Exoskeleton has degraded, locking her in sleep and requiring a Runite bar for repair.

After her exoskeleton is repaired, she agrees to aid them in taking back the Crystal City and travels to the entrance of the Grand Library. With the help of the player and the other six clan leaders as well as Iestin Edern, they defeat the Dark Lord and activate the Seal of Seren.

After Prifddinas is restored she waits for the player outside of the gates on their first visit. Afterwards she is found in the Trahaearn district of Prifddinas, standing just south of the Seren stones.

During The Light Within it's revealed that Lady Trahaearn had a husband, Cynog. Also during the quest, she enchants the enchanted key so the adventurer will be able to travel to the past and speak with Guthix. She can also be spoken to together with Lady Ithell to inform the player where to find the Seren shard of prudence.

During Sliske's Endgame, she is one of four elven clan leaders, alongside Lord Amlodd, Arianwyn and Iestin Edern to accompany Seren and aid her in the labyrinth. She was unable to determine how the gods had their divinity stripped from them, claiming it was not science nor technology doing it.

If players speak to her after smelting 100 corrupted ore, she will give them a Smithing experience lamp worth 50,000 experience.

Players doing Treasure Trails clues are sometimes directed to her with the anagram 'Hear A Lady Rant'.