Start a Wiki
"White Lands" redirects here. For the quest, see Myths of the White Lands.
For the music track, see Land of Snow (music track).
Not to be confused with Land of Holly and Hawthorn.

The Land of Snow is a fragment of the planet Renmark, created when Guthix inadvertently shattered the planet with The Blade. It can be visited during and after the Myths of the White Lands quest by talking to Wizard Isidor, and was the setting of the 2007, 2009s 2010 and 2016 Christmas events. The area was first released on 18 December 2007.

The history of the Land of Snow (as given by the Queen of Snow) is as follows: "The Land of Snow was created aeons ago by Guthix, as part of his balancing of the world. The coldness of this place counteracts the heat of the great deserts and volcanoes of others, ensuring the correct balance of hot and cold."

The Land of Snow is inhabited by snow imps and the Queen of Snow, and was a place where players could make and pit snowmen against each other in battle. To make a snowman a player had to simply place snow on the ground and contribute snow to the pile until the pile was big enough, then various head-dresses could be used on the snowman to bring it to life. The type of snowman created depended on the type of head-dress used. A snowman made with a bow/staff/sword would turn into a ranger/mage/melee snowman. Not all headdresses made a snowman a combat snowman. For example, using a dragon headdress on a snowman simply turned it into a dragon snowman that waltzed around and could be talked to. After a player made their first snowman, they would get the "snowman dance" emote.

Once combat snowmen had been built, they walked around randomly, challenging any other combat snowmen as they pleased. The creator of the snowman had no control over this. No one is sure whether the combat triangle (range beats mage, mage beats melee, melee beats range) applied to the snowman combat. As a snowman took damage, it could be healed by throwing snowballs at it. If a snowman was defeated, it then melted away and another one would have to be made. Some people reported that their snowman simply "vanished" after a while, and no one is sure whether this happened after a snowman had won a particular amount of battles, whether it was normal or if it was a glitch.

The Queen of Snow gave snow globes to players who spoke to her. Recipients can shake the snow globe to fill their inventory with snowballs and pelt other players.

Players can access the Land of Snow again during the Myths of the White Lands Quest, but they cannot enter the Snowman Arena. Contrary to popular belief, the area in which players fight Jack Frost during the 2008 Christmas event is not in the Land of Snow, but in the Wilderness, which is odd considering the fact that the player helped out in freeing Santa Claus. 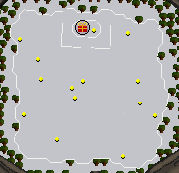 The Land of Snow in 2007, with snowman rangers, mages, warriors, snow imps and the Queen of Snow.

A player doing the Snowman Dance in front of the Snow Queen's Carriage in 2007. 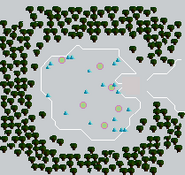 An overhead view of the first visible part of the Land of Snow seen during Myths of the White Lands. 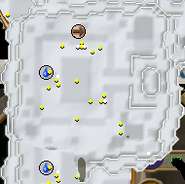 Santa Claus' and the Queen of Snow's reindeer as seen in the Land of Snow for the 2009 Christmas event. 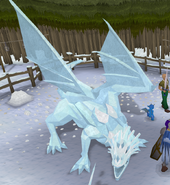 The dragon ice sculpture seen in the Land of Snow, 2009. 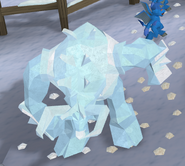 A metal minotaur ice sculpture seen in the Land of Snow, 2009.

A unicorn ice sculpture seen in the Land of Snow, 2009.

The Heimland Games of the 2010 event.
Click an image to enlarge

Retrieved from "https://runescape.fandom.com/wiki/Land_of_Snow?oldid=24922077"
Community content is available under CC-BY-SA unless otherwise noted.