Start a Wiki
OS
Not to be confused with Luthas or Lathas.

He runs this place. 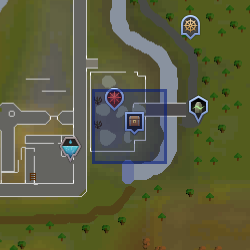 Lanthus is the custodian of the Castle Wars minigame and can be found standing in the lobby. He is a bearded man with a monocle and a large nose. He wears one of the Castle Wars reward capes. He runs the Castle Wars Ticket Exchange and also informs people when a game has ended as well as teaching those new to Castle Wars about the game. Postie Pete will at times appear in the Castle Wars lobby and hold a brief conversation with Lanthus.

As of 17 November 2009, Ava's attractor, accumulator, and alerter can be taken to Lanthus for him to add their ammo retrieving ability to the cloaks used in the minigame. He can also be contacted via the NPC Contact spell to know when the next game of Castle Wars starts and how many players are on each team.

Retrieved from "https://runescape.fandom.com/wiki/Lanthus?oldid=24921717"
Community content is available under CC-BY-SA unless otherwise noted.