OS
This article is about the zookeeper. For other uses, see Larry (disambiguation).
Loading...
NormalStraitjacketPenguin suit 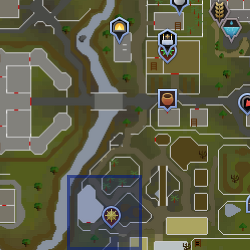 Larry is a seemingly lunatic zoo keeper who knows about the true intentions of the penguins, and is part of the PBJ, an organisation against the penguins and their evil plans. He may have ties to the FBI and PWNED as well. Players must talk to Larry to start the Cold War and the Hunt for Red Raktuber quests. During Cold War, when players have made a clockwork penguin, he shrinks the player so that they can fit inside the suit. He only does this at the following locations: Iceberg, East of Yanille, Ardougne Zoo and at the Lumbridge sheep pen.

However, Larry will only shrink players in the Lumbridge sheep pen during the quest. He is apparently quite a proficient magic user as he can shrink and tele-other players during the Cold War quest, although he says that teleporting stresses him out, which is probably why he doesn't always use it to get to faraway locations during the quest.

If players would like to have a penguin as a pet, they should ask the penguin keeper for an egg as opposed to Larry, as he does not give penguin eggs.

Battle against the penguins

Larry is often ridiculed by his fellow zoo keepers for believing penguins are 'evil' and 'planning to overthrow mankind and rule the world'. He manages to convince a bypassing adventurer that he is not, as is believed, mental and together they set off to investigate penguins in their natural habitat; the iceberg.

The adventurer constructs a bird hide in loco and together they spy on two penguins giving each other a series of greetings which indicate an evil conspiracy, according to Larry, although it just seems normal penguin behaviour, such as flapping, preening or shivering. Nevertheless, investigation continues and the adventurer builds a clockwork penguin suit which Larry can shrink them into in order to infiltrate the penguins. Soon, it is discovered that Larry was very right indeed. One of the penguins in the very pen in Ardougne Zoo is an agent of the Killer Gentoo Penguin orgnasation, KGP for short, and is tricked into revealing the location of the penguin HQ. There are also two penguin agents in a farm in Lumbridge disguised as a sheep to spy on Fred the Farmer, whom they believe to be the King of Lumbridge.

With the help of a friendly and cooperative non-evil macaroni penguin by the name of Noodle, member of the Fettuccine Mafia, the adventurer, under the guise of a penguin, enters the penguin headquarters. There, they discover that penguins are all but the harmless flightless birds they seem to be (albeit still flightless) and the adventurer discovers a training grounds for penguin soldiers, complete with agility course, where penguins are trained to soon take over the world, and quite successfully (although their attempts to fly remain futile).

They investigate further, discovering a securely guarded door leading to a prison and a war room where Pescaling Pax, son of the Pescallion, is in a meeting. While friendly new musician penguin friends, who do not wish to take over the world at all, Ping and Pong, distract the guard, the adventurer sneaks inside and overhears the meeting. 'The Pescaling' is making preparations for war, but then magic detectors alarm him of the intruder and they shrink out of their suits. The penguin suit is confiscated for future use and the intruder thrown into prison, although they manage to escape after killing a number of dangerous icelords. They report to a shocked Larry, who starts to make plans.

Failed Holiday and Search for a Submarine

The following takes place during Hunt for Red Raktuber.

After the previous shocking events, Larry decides to go on a holiday to take his mind off penguins. He finds a luxurious retreat in the nearby town of Witchaven, where the insane villagers who are possessed by sea slugs make him feel at home. His relaxation shortly comes to an end, however, when he spots a giant penguin in the sea, diving into the depths, and notices the gigantic penguin foot prints in the sand. A frightened Larry speedily returns to the Zoo to inform his colleagues of the series of events. In turn, they conclude that he has finally snapped and decide to put him in a straitjacket for his own good, much to Larry's anger.

Fortunately, the adventurer comes to visit Larry again and decides to help free him from his state. They go to Witchaven to investigate and confirm Larry's story, convincing the chief zookeeper to come along and release Larry. The penguins are definitely up to something and, after making a replacement penguin suit, the adventurer infiltrated the KGP yet again. They encounter an old interrogator, whom they help getting information out of a captured penguin. It is revealed that heis a cabin boy of the submarine, called the Red Raktuber, and that he was sent to the HQ to inform the KGP that the members of the crew no longer serve The Pescaling, as they have found a better leader. He also tells that, to access the submarine, a certain 'fish hat' must be worn (squid, monkfish, puffer fish or ray) and a conch shell must be blown, before performing a number of secret gestures.

Having suspicions that more information could be in the war room, the adventurer addresses the help of old friend Ping and Pong again. He helps them finish their lullaby, Rockhopper Penguin, which they sing for the guard to fall asleep, allowing the door to be opened. There, four dwarves are working on another penguin submarine, which is based on the captured penguin suit. The adventurer reveals themselves as a spy and shows their human form to the dwarves, who claim to be captured and forced to build the submarine. In trade for their own penguin suits, they will teach how to control the submarine. The adventurer then gets spotted and is kicked out of the base and reports to Larry, who had been waiting outside. He tells that he cannot cast the shrinking spell from a distance, but that the supplies should be brought anyway. The adventurer teaches the dwarves how to make the suits and, as promised, they teach the technique how to disable the submarine. Larry then suggests to speak to old acquaintance Noodle to locate the submarine. He supplies the adventurer with a fake KGP ID pass used to enter the KGP archives, where the coordinates are found; just east of Yanille.

Capture and the PBJ

The following takes place during Hunt for Red Raktuber.

After doing the necessary tasks, the submarine emerges and the adventurer, still a penguin, boards the Red Raktuber. All crew members direct them to Captain Marlin, who believes they have come to destroy him. He reveals that he think it is impossible for penguins to achieve world domination and that the race must become one with the sea. He then reveals himself with a sea slug on his head, although it's dead and he is simply crazy. He then sends the adventurer to the rig and confiscated the toolbox that needed to be used to disable the submarine. Using dead marine creatures, they manage to escape and supposedly disable the submarine anyway. However, it seems to reroute itself and the adventurer emerges on a desert island.

An evil plot is revealed. Pescaling Pax, the dwarves, KGP agents and a gagged Larry are on the island. Pax reveals that it was all his plan. The dwarves are really from the Red Axe, but they split off to aid the penguins, and they actually taught the adventurer to redirect the submarine in exchange for penguin suits. Now, Pax owns both the submarine and has captured Larry, the only other human who knew of the penguins' intentions. The KGP and dwarves take Larry with them on the submarine to take to the Motherland and leave the adventurer to starve to death.

However, they discover a polar bear called Chuck (badly) disguised as a palm tree. He reveals to be an agent of Polar Bears for Justice, or PBJ, an organisation fighting the penguins that Larry is also a part of. Chuck swims back to shore with the adventurer on his belly and temporarily replaces Larry in the zoo while he is gone.

The following takes place during Some Like it Cold.

While imprisoned by the penguins, Larry is brainwashed into believing he is a penguin, dressing up as a penguin and trying to get an egg. He is imprisoned again, this time by the Walrus, when the submarine is taken and damaged by the seals. During this time, he has been tracked by Teddy, an agent of the PBJ, who is captured as well. Teddy tries to bring Larry back to his senses and help him escape, but is forced to conclude that Larry has gone insane. After an escape attempt fails, Teddy is forced to become a clown for the amusement of the seals.

The adventurer arrives at the camp as part of a touring music group along with Ping & Pong, and enlists Teddy's help in planning another escape attempt with Larry. The adventurer tries to find an egg for Larry through the black market, but has to resort to stealing one from the Walrus. The captive penguins rebuild the submarine in secret. Larry joins in the escapees consisting of the captive penguins, Ping & Pong, Teddy and Astoria the seal, fleeing on the badly damaged submarine, where he helps make various repairs while the adventurer fends off the seals' submarines.

After the seals are defeated, Larry is escorted to Chuck, where he regains his senses. Larry's penguin egg hatches and Sheldon the baby penguin is born. After that, Larry is taken to a secret PBJ base.

Larry is the starting point for the penguin hide and seek distraction and diversion. He can be located with the Distractions and Diversions icon (

) on the world map. Doing Cold War is not required, however if you do complete you may receive a point bonus.

When spoken to, he explains how to spy on penguins, and provides players with the spy notebook to keep track of their activities. By doing this, player earn penguin points which may be traded for coins and experience.

Larry may give 9-11 hints for penguin locations. As the penguins move around, additional hints may be given during the current week:

Retrieved from "https://runescape.fandom.com/wiki/Larry?oldid=24562330"
Community content is available under CC-BY-SA unless otherwise noted.
... more about "Larry"
RDF feed
Is members only
Yes +
Store location
Ardougne Zoo +  and Prisoner of Walrus camp +