Not the smartest of butlers 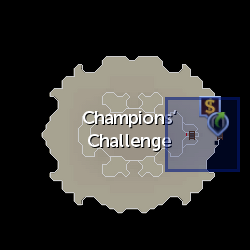 Larxus is an unkempt butler in the Champions' arena (located below the Champions guild) who is part of the Champions' Challenge Distraction and Diversion. Larxus will not allow anyone into the fighting arena until the Player has presented a Champion scroll to him, and only then will he allow access to the arena below.

When you complete a Champion's Challenge, Larxus rewards you with 200 to 6000 Slayer and Constitution experience, depending on which Champion was defeated.

If it is your first challenge (including the training challenge), Larxus will also reward you with a bag of Calling beads. These can be used to summon a Banner carrier, which follows you and displays those champions that you have defeated. If the Calling beads are lost, they can be reobtained for free from Larxus.