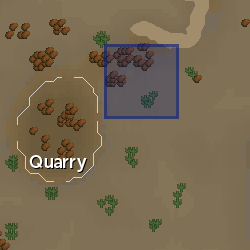 Lazim is a mysterious character in the southern Kharidian Desert near the Granite and sandstone quarry, and starts the Enakhra's Lament here, whilst posing as a desert sculptor. Though he is openly a follower of the god Zamorak, his true intentions are not revealed until the player has built him a sizeable statue with a head of any kind.

During the quest itself, Lazim attempts to trick the player into thinking he wishes to build a statue commemorating someone or something and, despite the notion that the middle of a desert is an odd place to build a statue, the player must oblige. It is then discovered that the statue was just a ploy, and Lazim was actually attempting to unearth a temple dedicated to the Zamorak-aligned Mahjarrat (and only remaining female of her kind), Enakhra. While the player goes through a series of puzzles, Lazim waits patiently, letting the unwitting hero find her and release her from her prison. However, Enakhra and Akthanakos, another Mahjarrat, aligned with Zaros and in battle with Enakhra, are both released and flee to The North, thus depriving Lazim from studying them.

After the quest, Lazim can be found in the top floor of Enakhra's Temple, and you can get another Camulet from him if you lose yours. If you speak to him otherwise, however, Lazim will say you've just deprived him of a wonderful chance to learn from one of Zamorak's first followers. The player may ask Lazim to teach them his powerful magic. He will respond, however, that "If you really want to learn my spells, you'll have to dedicate yourself to Zamorak."

Saying that you want to learn from him you will have two options, one is "sure, sign me up;" he will call you a fool and will not teach you. The other option is "I couldn't do that", to which his response is "Then I won't be teaching you", followed by insane laughter. This dialogue is available only once for each player.

Retrieved from "https://runescape.fandom.com/wiki/Lazim?oldid=24562399"
Community content is available under CC-BY-SA unless otherwise noted.