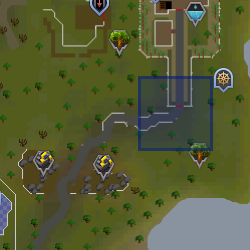 Legends guards are unattackable guards outside the Legends' Guild. They wear what appears to be blurite armour and carry an iron spear.

The two guards will greet you when entering/leaving the guild. Their message varies on your status in the Legends' Quest. The messages are: "I hope the quest is going well sir" for male players who have started the Legends' Quest or "Attention! Legends' guild member approaching!" for those who have completed it.

If you talk to one or try to open the gate before starting/completing the Legends' Quest, the guards will talk to you about what the Legends' Guild is and the requirements for the quest (if you do not already have them).

Retrieved from "https://runescape.fandom.com/wiki/Legends_guard?oldid=24562801"
Community content is available under CC-BY-SA unless otherwise noted.