Leon d'Cour is one of the 16 champions fought as part of the Champions' Challenge distraction and diversion. He is the human champion, and is one of the six Champion of Champions. Unlike most of the other champions, he does not have a champion scroll, but instead challenges players after they defeat 10 standard champions. After he is defeated the first time, he may be fought again weekly for additional slayer and constitution experience.

Like the other champions, there is a special restriction during the fight with him; in his case, players cannot bring in any items besides those worn. As a result of this, players that fight with Magic should bring a small rune pouch or a large rune pouch; otherwise, players are restricted to spells that can be cast with an air staff, Armadyl battlestaff, polypore staff, or a runic staff charged with spells. He attacks with melee and is weak to earth spells.

Leon is one of the most powerful champions in the minigame, and his melee attacks are capable of hitting relatively high. As food cannot be used, good melee or magic armour is advised, as is the use of protect from melee or deflect melee. 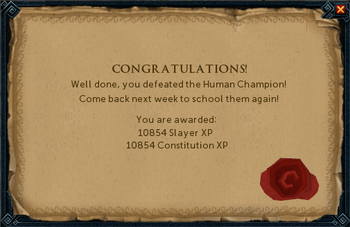 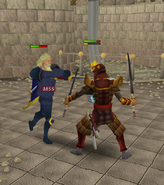 Leon d'Cour's empty seat as seen after his defeat.
Click an image to enlarge
Retrieved from "https://runescape.fandom.com/wiki/Leon_d%27Cour?oldid=21165550"
Community content is available under CC-BY-SA unless otherwise noted.