Start a Wiki
CSOS
This article is about common lesser demons. For other lesser demons, see Lesser demon (disambiguation).
123
45
? (edit) 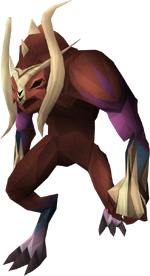 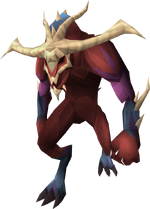 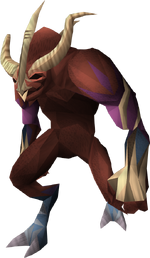 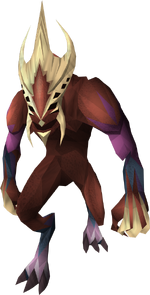 Lesser demons are a kind of demon weaker than the closely-related greater demons, categorized by the absence of wings. They have 5000 life points, a maximum hit of 480 damage, hit at the speed of a scimitar or mace, and regenerate at an average rate of 20 life points per minute. All lesser demons use a magic projectile attack.

Lesser demons originate on Infernus, where they were called Byzroth, as the other demons seen in Gielinor do. They are part of the Avernic race, which were tribal and primitive, and slaves to whoever was ruling Infernus at the time. At the time of Palkeera's memory of the realm, they were enslaved by the cannibalistic Chthonians, who were unable to consume the Avernics for some reason. Among the Avernic demons, the Tsutsaroth were the dominant tribe, ruling over the Alyaroth and Byzroth in a brutal manner.

In free-to-play worlds, higher levels are recommended to train Magic on these monsters as they provide one of the best experience rates for Magic. Though they have inferior drops compared to similarly-levelled monsters, one can still make a decent amount of money per hour while training Magic. Lesser demons also always drop accursed ashes for training prayer. Also, it's best to train on lesser demons and avoid cockroach soldiers if you're training range. This is because lesser demons have a weakness to ranged attacks and cockroach soldiers don't. Therefore, medium level players sometimes kill these monsters for ranged experience as they have low defence, especially against bolts. However, it is advised that higher-levelled players train melee on deadly red spiders instead.

Lesser demons are effective training monsters for players that are medium to high levelled (above 80 combat level). Since Karamja has many fishing spots, players may fish for food on the island if they run out, or members can go through the cave and go to the bank in TzHaar City to re-stock on food. Fighting the lesser demon in the Wizards' Tower can be good for training Magic, Ranged, or alternatively melee using a halberd since the demon spawns inside of a magical ward. The respawn time of a lesser demon is quick, which means experience may be gained quickly killing them. It is recommended for meleers to wear strong armour such as adamant, rune or Barrows armour, and rangers and mages should take a few pieces of good food in case since lesser demons are aggressive. With blue dragonhide and a good bow, a player could easily kill a lesser demon, although a few pieces of food may be necessary.

Lesser demons are affected by the powers of Silverlight and Darklight, which increase damage inflicted by 60%. However, many players find these weapons to still be rather inaccurate. F2P players are instead recommended to use a rune weapon. The type of weapon doesn't matter as the demons are weak to bolt attacks and not melee, but ideal choices include the 2h sword for its damage output and the mace for its prayer bonus and attack speed. Members should use a dragon weapon or barrows weapon; higher level weapons are not necessary for a monster of this level.

New players who are using Magic or Ranged may go to the Wizards' Tower and kill the trapped lesser demon. However, this spot often gets crowded, and players may not get much experience. Bringing a few law runes and a staff of air to tele-grab any good drops (such as the rune helm) is advised. Otherwise it will not be possible to pick up any of the demon's drops.

A rapid way to kill demons and bank their drops or pick up food is to use the explorer's ring 3 or higher. Cabbage-port, run to the pier, go to the Karamja dungeon, kill demons, cabbage-port when you have enough, and deposit the drops at the deposit box near the Entrana ship or pick up food at the Draynor bank. The ring will double as an emergency teleport, as its animation is unhindered by attacks. This method became somewhat outdated with the introduction of lodestones; the Port Sarim lodestone in combination with the Edgeville stone and bank may be faster. However, lodestone teleport is interrupted by combat and cannot be used as an emergency teleport.

Medium-higher level players using ranged may opt to use these for free prayer training, in conjunction with accursed urns.

In addition, players training at the Karamja volcano have the option of picking up two regular bone spawns that appear quite frequently.

Lesser demons are one of the 'races' who have lesser champions in the Champions' Challenge Distraction and Diversion. To fight the Lesser Demon Champion, the player must kill lesser demons until one drops a Champion's scroll, a very rare drop.

Retrieved from "https://runescape.fandom.com/wiki/Lesser_demon?oldid=24920696"
Community content is available under CC-BY-SA unless otherwise noted.