RuneScape Wiki
Register
Don't have an account?
Sign In
Advertisement
in: Horror from the Deep, Dungeons, Buildings, Quest locations
English

The Lighthouse is an area north of the Barbarian Outpost, and features prominently in the Horror from the Deep quest. The Lighthouse can only be entered during and after the quest, however the island itself can be visited prior to starting the quest. Its dungeon is a popular place for players to kill dagannoth for Slayer. Jossik can be found upstairs after completing the aforementioned quest. He runs a general store and will provide players with God books, as well as replace any that are lost.

Months ago, Silas was appointed keeper of the Lighthouse by the council, but he became mentally unstable with time due to the prolonged isolation coupled with the chittering coming from the basement.

One day, Silas investigated the basement and discovered the Dagannoth dwelling there. He became obsessed with them, aspiring to become a Dagannoth himself. In order to keep their existence a secret he built a massive iron door that could only be unlocked with four elemental runes, a sword and an arrow, all the while growing increasingly detached from his job and from reality.

Eventually, Silas attempted to "join" the Dagannoth and disappeared, leaving the Lighthouse unattended. He was presumed dead and his nephew Jossik was forced to replace him as keeper. He was allowed to sell items free of taxes as compensation.

Jossik was initially afraid of the local Fremennik, but he began to warm up to them as he saw his fears were mostly unfounded. The loneliness of his job began to affect him as it affected his uncle, when he met and befriended a local girl named Larrissa.

During the following months, Jossik and Larrissa slowly fell in love with each other. Meanwhile, Jossik continued investigating his uncle's fate, growing increasingly concerned with the noises he heard at night. At some point he gave Larrissa a spare key to the Lighthouse, in case anything should happen to him.

One night, Jossik heard a noise from beneath the Lighthouse. Knowing the front door was locked, he investigated the basement in search for intruders. When he got past the door his uncle built, Jossik was attacked by the Dagannoth and was injured badly enough that he could not escape on his own.

Larrissa returned during the following days and realised that something was amiss when she noticed the light in the top floor had gone out. She asked a passing adventurer for help, who proceeded to retrieve her key from her cousin Gunnjorn in the Barbarian Outpost, fix the bridge separating the peninsula from the Fremennik Province and restore the Lighthouse to working order. After unlocking the basement door, the adventurer found Jossik, who warned them about the Dagannoth who attacked him. The adventurer then defeated the Dagannoth Mother, allowing Jossik to escape to the surface.

The Lighthouse is in a somewhat remote area. Players can get there from the Barbarian Outpost by jumping across the northern columnar basalt rocks that protrude from the sea. It is possible to slip on the rocks, which results in the player falling into the water, being swept back to shore, and taking damage. It is noted that having an Agility level above 35 increases the likelihood of successfully jumping across the rocks. Players seem to have a lot of trouble getting over the rock as the character "fails" to jump over it several times.

Another route of access is via a bridge, which is fixed during the quest. The bridge is located in the south-western part of the Fremennik Province. If the bridge has not been fixed, the player can jump across it, but this will cause damage.

There are several teleports that arrive near the Lighthouse: 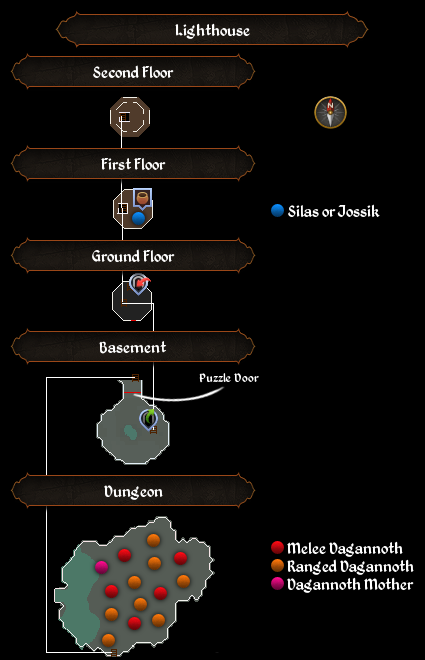 The ground floor has the stairs to the first floor and a metal ladder to the basement.

The first floor is the room for the Lighthouse's tender. It contains a bed, bookcase, two sets of drawers, and stairs leading up and down.

Jossik can be found here after the player rescues him in the quest. He replaces Silas as the keeper of the Lighthouse. Jossik runs a general store in this room. Besides the usual items like hammers and rope, the store also sells:

Jossik will replace a player's Damaged book or God book if it is lost, with collected pages intact. If a player completes a god book, Jossik will also sell them a new one for 5,000 coins.

The second floor contains the light and its mechanism. The player repairs the mechanism during the Horror from the Deep quest.

The Lighthouse building is difficult to see from the ground, but a better view of it is possible on this floor.

The basement contains the ladder back up, a small pool of water, and a door to the north. Beyond the door is a foyer with a ladder down into the dungeon.

The dungeon is a single large chamber. The westernmost part is a pool of water, presumably connecting to the sea outside, while the rest is dry land.

After the quest, the dungeon is crawling with many dagannoth. The dagannoth here, although moderately strong, are inaccurate in their attacks and are not as powerful as their levels suggest. The level 74 dagannoth shoot spikes at players as a rather poor ranged attack, and the level 92 dagannoth attack with a slightly more accurate close-range bite. Many dagannoth wander about near the entrance ladder, so players should be prepared for combat as soon as they descend into the dungeon.