The Living Rock Caverns is a members-only area that was added on 17 September 2009. The area was designed for players with high levels in Fishing and Mining.

There are no quest or skill requirements necessary to enter this area. However, it is a dangerous area, as aggressive level 92 living rock creatures guard the resources, so training skills here may very well be interrupted regularly and dangerous. Wearing the magic golem outfit or fury shark outfit will cause the creatures to be tolerant.

For players of low combat or wishing to spend a long time in the cavern, it may be advised to train with other players on the official Living Rock Cavern world 83.

The Living Rock Caverns are found below the Dwarven Mine beneath Ice Mountain, near Falador. Defensive armour is recommended, as the living rock creatures are aggressive and high-levelled. There are several main ways to get there:

In the central part of the cavern Farli has set up camp. There is also a handy pulley lift. Players can use this device to deposit items directly into their bank, kind of like a deposit box. Players can deposit all of an item quickly by using an item with Farli's lift and pressing the 'all' option in the chatbox, or four on their keyboard. Topside, the lift's ropes face east/west. Bottomside, they face north/south. This is where Farli resides and where players will appear when you enter the dungeon from the Dwarven Mine. Here is also a rope that you can climb back up to the Dwarven Mines. A Summoning mini-obelisk is just outside the entrance to the caves; a little east by the two iron rocks.

This area is a safe zone, as the monsters will not attempt to chase after players. However, living rock strikers can still attack the player from afar.

The official world for mining here is world 83. This can be useful for avoiding taking too much damage from the various creatures that live in the dungeon, especially for lower level players. However, the large number of players moving about can make the world unplayable for those with lower-end bandwidth due to lag / game stuttering. Mining with graphics in "Safe Mode" or "SD" (Standard Detail) may help (see Graphic options).

Other "rocks" found in the cavern are the remains of the living rock creatures. These are found directly after a kill. The remains are minable by the player who killed the creature immediately, and by other players after a one minute delay. The remains contain between 5 and 20 living minerals which can be traded, sold, or used for bait when fishing rocktail. Players receive 25 mining experience for mining living rock remains.

Two types of fish can be caught in the Living Rock Caverns: cavefish and rocktail. Attempting to cook raw food on Farli's spit-roast yields the message "It would be a bit rude to do that while Farli is cooking here."

Eating the fish raw using the Bunyip's Swallow Whole scroll does not currently give the special bonuses.

The caverns are home to the living rock creatures. The caverns are populated with living rock protectors and living rock strikers, both level 92 monsters and use melee, along with ranged for the latter. They can be assigned as a potential slayer assignment by Kuradal. In addition, a level 95 living rock patriarch spawns erratically every two hours which can be killed for a small range of guaranteed loot.

These creatures are not aggressive if wearing the full Magic golem outfit or the shark outfits. 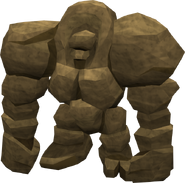 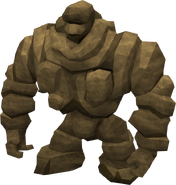 Retrieved from "https://runescape.fandom.com/wiki/Living_Rock_Caverns?oldid=24308823"
Community content is available under CC-BY-SA unless otherwise noted.