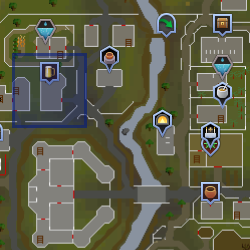 The local thug is an NPC that is located in East Ardougne in the Flying Horse Inn and in a small house by the fairy ring east of Edgeville. The local thug can only be seen after While Guthix Sleeps, and replaces Lucien that was once in those locations. He is accompanied by a Local Mage in the house by Edgeville.

As a servant of Lucien, the Thug in Ardougne will hand out pendants of Lucien in place of his master.

The thugs are wearing equipment similar in appearance to elite black armour and an old version of Dharok's Greataxe. The thugs cannot be attacked.

Even after the events of Ritual of the Mahjarrat, the local thug continues to serve Lucien, however, the player tells him that Lucien is dead, where he becomes shocked.

Retrieved from "https://runescape.fandom.com/wiki/Local_thug?oldid=24563712"
Community content is available under CC-BY-SA unless otherwise noted.