Either a very fremennikey pirate, or a very piratey fremennik. 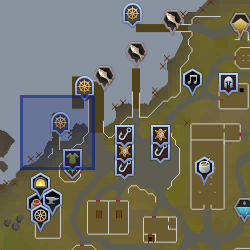 Lokar Searunner is a Fremennik pirate serving aboard the Lady Zay who left the Fremennik people as he found them to be boring. While he found the warring aspects to be enjoyable, he disliked the domestic aspects such as farming.[1] He has recently returned to Rellekka as he and his crew are running low on supplies. He can transport players to Pirates' Cove and the Lady Zay.

He is considered to be a poor team member, making deals without Captain Bentley's approval, and generally having a bad work ethic.[2] He is also rather confrontational, insulting people he doesn't like by calling them losers[3] and insulting their homes.[4]

At one point, he brought a strain of vine to Lunar Isle and asked for it to be enchanted for use in the defence of Rellekka. Unaware of his being a pirate and taking a liking to him, Pauline Polaris set up the Livid Farm, growing vicious vines to be used as a living fence.

Retrieved from "https://runescape.fandom.com/wiki/Lokar_Searunner?oldid=24562669"
Community content is available under CC-BY-SA unless otherwise noted.