Lost Her Marbles is the second caper involving the Lumbridge Thieves' guild. It can only be assigned to players who have completed the Buyers and Cellars quest and the first caper, From Tiny Acorns.

Speak to Darren Lightfinger to begin the caper. He will ask you to find Flame fragments: pieces of solidified fire that were created when a magician named Drannai Silverborn had a serious accident and blew herself up. As the fragments were then found by NPCs, the player must pickpocket certain NPCs to retrieve them. There are eight different types of NPCs that can be pick-pocketed:

Exit the Thieves' guild through the trapdoor. Keep pickpocketing the nearby Men and Women just north of the castle, inside the walls, until you get 6 flame fragments. Then, walk north-east and cross the bridge over the River Lum and enter the H.A.M. hideout by picking the lock on the entrance. Pickpocket the H.A.M. Members to get another 6 flame fragments (you need at least two spaces in you inventory, one for the stolen item, and one for the fragment, otherwise you will never receive the fragment) - there is a chance that, if caught, you may be imprisoned or chucked out of the dungeon.

Leave the hideout and go north to the chicken coop. Pickpocket the farmer in either the yard or the house for 6 more flame fragments.

Travel to Draynor Village and walk to Draynor Market, pickpocket 6 flame fragments from the Master Farmer there.

Travel to Varrock and head towards Varrock Castle. In the castle courtyard, pickpocket Guards until you gain 6 fragments. Enter the castle and pickpocket the Warrior Women in the rooms south of the north-west tower for the final 2 flame fragments.

To reduce the chance of failure while pickpocketing, it may be less time-consuming to pickpocket rogues in the Wilderness, as they don't require as high of a Thieving level to pickpocket. Normally, this method would come with a great deal more risk, but if the player has level 57 Woodcutting, they can get to the Rogue's castle with a surprisingly small amount of risk by taking a waka canoe to the secret Wilderness entrance then heading west and using the Wilderness obelisks until they reach the one just south-east of the Rogue's castle. Alternatively, if the player does not have level 57 Woodcutting, but has level 84 Magic and has completed Desert Treasure, they can also use the Carrallanger Teleport spell and then head south and access the obelisks from there.

Once you have 32 flame fragments, it will not be possible to acquire any more by pick-pocketing NPC's.

Return to Lumbridge and speak to Darren Lightfinger. He will take 8 flame fragments from you and tell you to claim a reward from Chief Thief Robin. Talk to Robin, who is located near to Darren, to get a reward (see list below). Keep doing this until you have given Darren all the fragments. Congratulations, caper complete! 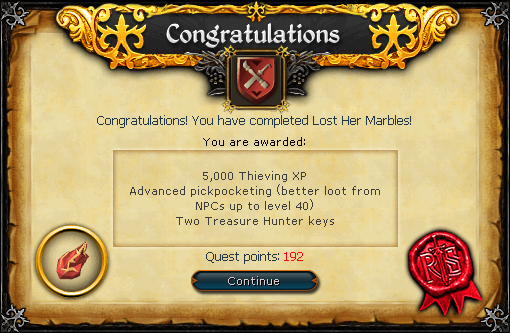 Retrieved from "https://runescape.fandom.com/wiki/Lost_Her_Marbles?oldid=24309081"
Community content is available under CC-BY-SA unless otherwise noted.