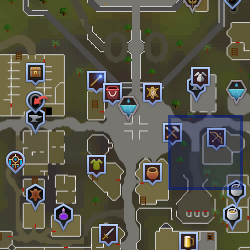 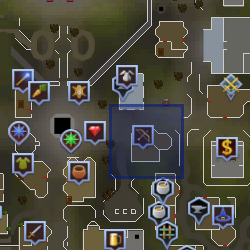 Lowe is the owner of Lowe's Archery Emporium, found in Varrock just east of the general store. He sells ranging equipment including bronze through adamant arrows, bronze bolts, crossbows, and a variety of shortbows and shieldbows. The higher level equipment there is, the less there will usually be in stock, since it is higher in demand.

In Dimension of Disaster, his zombie counterpart continues to run a ranged shop, and stocks basic ranging gear. He is also a member of the Black Arm Gang. If the player did not join the Phoenix Gang, he advises the player not to go up the ladder. It is later revealed that a phoenix has made its home there and is aggressive towards anyone who enters.

After a 2009 update, Nemarti does not supply any more training arrows and bows, with Lowe instead granting them free of charge to all players. Lowe wears an eyepatch and what appears to be a hardleather body. The anagram 'El ow' in treasure trails refers to him. When you speak to him, he will ask if you want to see his wares. If you select no, I prefer to bash things close up, he will reply, humph, philistine.. He was the second person to contact in the 2010 Cryptic Clue Fest II.

Lowe appears to fletch his own wares, as in a back room of his shop is a workbench with some unstrung bows and other fletching materials along with piles of wood. In 165, he fletched a dozen adamant arrows, the tips supplied by Doric the dwarf, for King Roald's embassy to Morytania to use, his services paid for by Lord William. Lowe also made a yew composite bow coated with tallow to go with them, and encouraged the group to "bring back some [werewolf] pelts," unaware of the nature of Gar'rth, who would be using the bow.

Players doing Treasure Trails clues are sometimes directed to him with the anagram 'El Ow'.

Retrieved from "https://runescape.fandom.com/wiki/Lowe?oldid=22201059"
Community content is available under CC-BY-SA unless otherwise noted.
... more about "Lowe"
RDF feed
Is members only
No +  and Yes +
Store location
Eastern Varrock +