A crotchety old fisherman who doesn't like young whippersnappers. 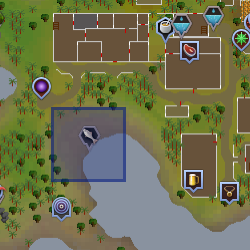 Lubufu is an old fisherman who doesn't like young whippersnappers. He can be found on the southern coast of Brimhaven, marked with a

He plays a small role in the Tai Bwo Wannai Trio quest. He has a monopoly on the karambwan trade, as he is the only fisherman in Karamja who is capable of catching them. During the quest, the player manages to convince him to train them as their apprentice, and they then use the information he taught them to teach Tiadeche. This ends his monopoly over the karambwan trade. Attempting to speak with him after the quest results in him yelling at them for ruining his business.

Retrieved from "https://runescape.fandom.com/wiki/Lubufu?oldid=24562461"
Community content is available under CC-BY-SA unless otherwise noted.