Lumbridge Castle is a castle located in Lumbridge and is the home of Duke Horacio. The courtyard enclosed by the outer walls features two decorative fountains and two statues, one of an ancient king and one of an ancient hero. A short flight of 3 steps joins this to the castle's front entrance. Another entrance is behind the castle.

Lumbridge Castle, in one form or another, has existed for over 1,000 years. The first mention of Lumbridge can be traced back to the year 1100 of the Fourth Age, when the developing nation of Misthalin was largely uninhabited, except for the city of Avarrocka. At first, Lumbridge Castle was a small wooden fort, built solely to protect Misthalin from the many threats that still lived both outside and within it.

For hundreds of years, Lumbridge Castle was the only significant structure in the area, essentially making the castle the only thing in the then-unincorporated town of Lumbridge. This all changed in the year 1937, when King Claudius of Varrock granted the area to Polonius, the man who would soon become the first Duke of Lumbridge.

Polonius, a vassal lord in the Misthalanian feudal system, established Lumbridge, expanding its borders beyond the wooden fortress. Polonius then ordered a bridge to be built over the River Lum, which would not only earn the town its name, but would also herald a new era of prosperity as commerce in areas such as Al Kharid and Entrana increased.

As Lumbridge became increasingly important, Polonius had the wooden fort destroyed and replaced with the much stronger Lumbridge Castle that exists today. Since then, Lumbridge Castle has housed the Dukes of Lumbridge, including the current duke, Horacio.

The following takes place during Lost Tribe and Death to the Dorgeshuun.

Recently, in the Year 169 of the Fifth Age, the Dorgeshuun cave goblins tunnelled into Lumbridge Castle's cellar by mistake. The Dorgeshuun, having hidden in the underground city of Dorgesh-Kaan since the cataclysmic God Wars, resealed the hole in an effort to continue their isolation.

The Dorgeshuun were seen, however, prompting an adventurer to re-establish contact with the long lost tribe. After much diplomatic effort, the Dorgeshuun signed a peace treaty with Duke Horacio, making Lumbridge Castle a portal of commerce between the surface and caves. The castle's advisor, Sigmund, outraged by the treaty, revealed himself to be a member of the extremist H.A.M. cult and was promptly exiled.

The Secret Council of RuneScape

The following takes place during Recipe for Disaster.

Centuries ago, the Secret Council of RuneScape, a collection of influential individuals from all over Gielinor, was established. Inviting them to a feast in the castle's dining hall for their latest meeting, Horacio ordered his castle chef to prepare a feast.

The chef, however, accidentally used a recipe of the Culinaromancer, one of the castle's past chefs. The deceased Culinaromancer attacked the council during the meal. Only with the help of a skilled adventurer and Gypsy Aris (using a time spell) was the Council saved and the Culinaromancer defeated.

Duke Horacio, feeling the castle should be better protected, established the Lumbridge Guardsmen, a small group of trained locals hired to protect the castle from potential enemies. Today they still serve loyally, although they have not been called to action for some time.

The following takes place during Battle of Lumbridge and Lumbridge Rebuildathon.

Shortly after the start of the Sixth Age, a portal appeared in the woods behind the castle. Some weeks after it appeared, the god of chaos, Zamorak stepped through, and, seeing some of Guthix's divine energy in the ground, started firing spells at the ground in order to gain them.

The onlookers who had come to see the portal quickly fled, and Zamorak was confronted by his rival, Saradomin. Saradomin attacked Zamorak, causing Zamorak to retaliate, and the huge amount of power they blasted at each-other caused a giant explosion, destroying much of the castle and forming a large crater outside.

The gods battled each-other for weeks, before Saradomin emerged victorious, causing both Zamorak and Saradomin to retreat, leaving the still-destroyed Lumbridge behind. Foreman George and his team of builders came to rebuild Lumbridge shortly after, and the Castle now looks much the same as it did before the battle.

The Lumbridge Castle's gatehouse is the front entrance to the Lumbridge Castle. Technically, it is part of the castle's walls. This gatehouse supports and controls a gate (the gate is not under a player's control) and contains two tower-like structures. The two structures in front of the castle can be climbed via interior stairs, leading to an area with two bronze pickaxe respawns. The structures each have three floors.

Two druid wardsmen can be found atop the gatehouse, creating a magical shield around the castle in order to protect it, to try and prevent another event like the Battle of Lumbridge from occurring.

The gatehouse is a necessary place to complete the Willow the Wisp of Smoke Medium-level task in the Lumbridge/Draynor task set. 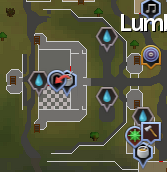 The ground floor consists of two rooms: the kitchen to the south adjoins the dining room to the north. The dining room contains various decorations, such as a long table, and many portraits.

The kitchen contains several water sources and a range. It is also home to the Cook, who is the starting point for two quests: Cook's Assistant (which players must complete to use the range) and Recipe for Disaster. The cook claims that his range burns food less often than other ranges.

The kitchen contains respawns for a bowl, pot, knife, and jug. Respawns for a mind rune and a bronze arrow are next to the south and north stairs, respectively.

The first floor of Lumbridge Castle contains two rooms. The northern room is Duke Horacio's bedroom, and players can find the Duke himself here. He provides a free anti-dragon shield to any player who has started the Dragon Slayer quest.

The southern room contains a spinning wheel, as well as a bronze dagger respawn. The spinning wheel is one of the most popular (most used) spinning wheels in RuneScape due to its proximity to the second floor bank.

The most notable feature on the roof is a bank, which used to house the only bank tutor. There is also a place where four logs respawn, which can be useful for training Firemaking.

As part of the Lumbridge and Al Kharid updates in July 2008, a third floor was added to the castle. It is the highest point in Lumbridge and also contains a flag that may be raised by anyone. Reaching the third floor and raising the flag are part of the beginner section of the Lumbridge Tasks, and players will automatically exclaim "All Hail the Duke!" For some reason, after the flag is raised, it will immediately be lowered again (see right). To get to the third floor you must climb the ladder on the north side of the bank on the second floor. While raising the flag your first time you complete an achievement.

Since the Battle of Lumbridge, a druid wardswoman can also be found atop the bank, assisting her fellow druids atop the gatehouse in creating a magical shield.

A trapdoor in the kitchen leads down to the cellar. Before either the Recipe for Disaster or The Lost Tribe quests, the cellar has no use except for several respawns: a cabbage, some leather boots, a bucket, a knife, and a jug.

The crates here can be searched to further the "You will need to under-cook to solve this one" hard clue scroll.

In member's worlds, after Lost Tribe has been started, there is an entrance to the Dorgeshuun Mine, which connects to the Lumbridge Swamp Caves.

Also in member's worlds, after the first part of Recipe for Disaster has been partially completed, the Culinaromancer's Chest is visible. The chest serves as a partial-service bank; one's bank account may be accessed, but not the Grand Exchange or returned items. The chest is also a food store and an item store, with more items and greater quantities becoming available as more subquests are completed. 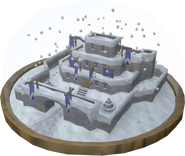 Lumbridge Castle was immortalised in a snow globe from the 2007 Christmas event.

The back of the Castle.

Another view of the castle and its courtyard
Nederlands
Community content is available under CC-BY-SA unless otherwise noted.
Advertisement