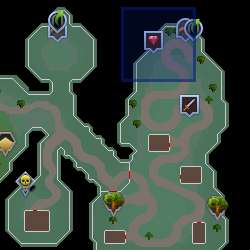 Lunderwin is a fairy found near Irksol, who buys cabbages from the player for 100 coins each. The cabbages cannot be noted. This is not a viable method for non-ironman players to make money as cabbage can be sold for 900 coins each on the Grand Exchange.

If a player took one diamond and twenty seven cabbages, then they could enter the marketplace and sell all of the cabbages to Lunderwin. Selling all these cabbages will yield 2700 coins, with additional coins possible if a Beast of burden is filled with cabbage. If Fairy Tale 3 is completed, a diamond will not be needed to enter the marketplace, thus increasing your inventory space for selling cabbages by one. Sacks of cabbages cannot be brought into the market place.

Retrieved from "https://runescape.fandom.com/wiki/Lunderwin?oldid=24563209"
Community content is available under CC-BY-SA unless otherwise noted.