Start a Wiki
For NPC in the Varrock Census, see Mabel Malore.
Loading...
MabelIn a sack 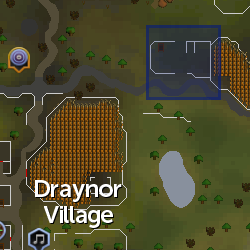 Mabel appears to be hiding in here.

Mabel is a young woman who lost her ring in a barn near Draynor Village. Rather than search for it herself, she chose to wait for a passing adventurer to find it for her instead.[1] While the adventurer is retrieving the ring, Zenevivia approaches her, threatening to cast Bones To Peaches on her skull and creating a few explosions.[2] Mabel hides in a nearby sack in fear and refuses to come out until Zenevivia had been dealt with.[3] Once Zenevivia has faced Dionysis in Love Story and attempted to rob the Wizards' Tower, she returns Mabel's ring which she had stolen from the adventurer to return to Mabel. Once the ring is returned, Mabel leaves the sack, handing over a lamp and leaving the area.

Mabel is rather timid, hiding at the first sign of danger.[2] She is also incompetent and reliant upon others to do simple tasks, being unable to retrieve simple objects without aid.[1] Zenevivia, a seasoned adventurer, despises her for her weak-willed attitude,[4] and thinks it would have been better had the adventurer forced her to retrieve her own ring.[5]

Retrieved from "https://runescape.fandom.com/wiki/Mabel?oldid=20004949"
Community content is available under CC-BY-SA unless otherwise noted.