Separated from its family when Prifddinas grew up around it. 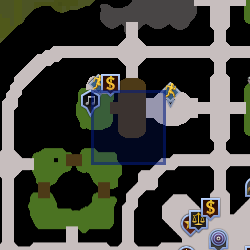 Madoc is a rabbit found in the Hefin Clan district of Prifddinas after completing the steps to unlock the title: [Name] the Hunter / [Name] the Huntress. He is investigated as the final step to unlock the title. Investigating him prompts the message, "You recognise the lone bunny who burrowed where Prifddinas grew. You decide to leave him alone after all he's been through." After the title is obtained, he continues to wander around next to the statue of Seren.

How to find him

Equip a Larupia hat, Larupia top, Larupia legs, Hunter's crossbow, Long kebbit bolts, and a Strung rabbit foot, and have a Teasing stick in your inventory, then complete the following steps in order:

You'll be told As you investigate the area you see something scuttle away, leaving more tracks. to make you aware each step has been completed.

Retrieved from "https://runescape.fandom.com/wiki/Madoc?oldid=24565280"
Community content is available under CC-BY-SA unless otherwise noted.