Start a Wiki
This article is about the NPC that starts the Swept Away quest. For the NPC in Draynor that makes dye and features in some quests, see Aggie. 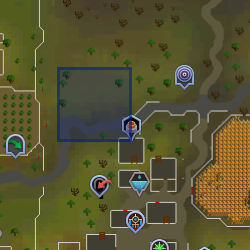 Maggie is a travelling witch who was the starting point for both the 2008 Hallowe'en event and the Swept Away quest. She can now be found near her caravan north of Draynor Village. Maggie owns two skeletal oxen, Babe and Norman.

She makes experience-giving goulash, which players can consume after they complete the Swept Away quest. As she has a sweet tooth, she also requested players to obtain sweets for her during the Hallowe'en event. Players who completed the event for her were rewarded with either the Witch set (for female players) or the Warlock set (for male players).

During the 2008 Hallowe'en event, Swept Away was available temporarily as a free-to-play quest. Maggie could be found in her camp south of Falador and east of the Crafting Guild, near her apprentice, Wendy. When the event ended, Maggie moved with her camp to a spot west of the Legends' Guild. Free players who had started or completed the Swept Away quest could visit her by speaking to Wendy (who had remained south of Falador); Wendy would teleport the player to a special area, Maggie's Realm. (Members playing on a free server could also do this.)

When Swept Away became a permanent free quest, Maggie and her camp were again relocated to a location accessible to free players, this time north of the Wizard's Tower. After the Wizard's Tower rework, Maggie moved slightly east. After the release of Divination she moved once again, this time to the north-west of Draynor Village, close to the wall, east of the cabbage field.

She is energetic since she eats too much candy. She walks like she is skipping and sometimes uses phrases such as "Cha" or "Don'tcha know."

Using the broomstick (and, indeed, every other item) on Maggie will cause the response: Thanks for the offer, but I don't really need that. Why don't you keep it? 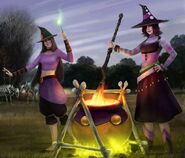 Concept art of Maggie and Wendy.

A front-page banner depicting Maggie and Wendy.
Click an image to enlarge

Retrieved from "https://runescape.fandom.com/wiki/Maggie?oldid=24615636"
Community content is available under CC-BY-SA unless otherwise noted.