Start a Wiki
For others called Mary, see Mary (disambiguation). 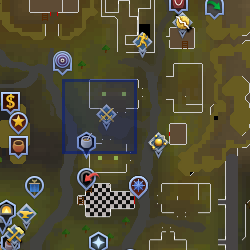 Major Mary Rancour is a high ranking member of the Burthorpe Imperial Guard. She has fought for many years in the Burthorpe–Troll Country War, having suffered grievous injuries and lost her husband and two sons.[1] She is heavily scarred from all the fighting. She can be found in Burthorpe, just south of Commander Denulth. She played a vital role in the Troll Warzone tutorial, aiding aspiring adventurers and conducting them into the Order of the Talon for their aid.

She oversees the combatants and guards of Burthorpe, watching the troll path from the wall at the north east area. She can give aspiring adventurers combat training advice and suggestions, and if asked will also give out five Varrock teleport, Falador teleport, Attack potion (4), Strength potion (4), Defence potion (4), Prayer potion (4), as well as a steel full helm, one time only. She can also replace lost dwarven army axes.

Kindred Spirits and Mega May

In one of Meg's cases, the Major was abducted in broad daylight during a combat drill.[2] Major Nigel Corothers took her place. He revealed that the whole area went dark despite the time, thus meaning none of the soldiers saw anything. He directed the adventurer to search for clues.

This case was a teaser for the quest Kindred Spirits, setting up her involvement in the story.

Major Rancour was one of four hostages taken by Sliske, alongside Meg, Linza and Brother Samwell, in order to force the World Guardian into playing his games involving the Barrows brothers. He executed Brother Samwell then used the other three to motivate the World Guardian, torturing them for the World's Guardian's failures. During a brief period where Sliske's attention was turned elsewhere, she expressed bitter resentment of the World Guardian, as their presence made her work all that much harder and less appreciated, and even caused the soldiers under her command to neglect their duty.[3]

After Sliske revealed Linza's treachery and turned her into a Barrows wight, she fled through a collapsing tunnel, escaping with Meg and the World Guardian.

Retrieved from "https://runescape.fandom.com/wiki/Major_Mary_Rancour?oldid=25381882"
Community content is available under CC-BY-SA unless otherwise noted.