Master of the mystical makeover. 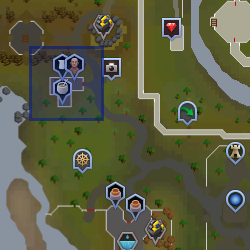 Master of the mystical makeover.

Pete/Peta[1] the Makeover Mage is a wizard with power over genders, located in the house outside the south-west corner of Falador and north of the Crafting Guild. The Makeover Mage plays a small, indirect role in three quests, namely Recruitment Drive, Land of the Goblins, and Evil Dave's Big Day Out.

The Makeover Mage allows players to change their skin colour and their gender. By default, the options are set to the current gender and skin colour of the player's character. Players who bought membership cards during the period of 20 October to 4 November 2011 received the ability to choose green as a skin colour choice.

The Makeover Mage also sells Yin yang amulets. They are non-tradeable and offer no bonuses, but can be bought for 100 coins.

Several sheep are located just outside of their house for shearing; players can spin the wool into a ball of wool at the nearby Crafting Guild.