A collector of ancient artefacts. 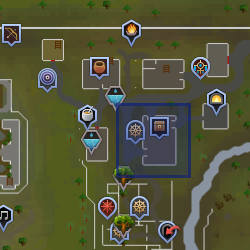 Mandrith was the custodian of Bounty worlds and PvP worlds before their removal. Mandrith is located in Edgeville bank. He allows players to exchange ancient artefacts dropped by revenants for coins, and sells rewards for Bounty Hunter and Deathmatch at the Bounty Hunter & Deathmatch Reward Shop.

The artefacts he purchases from players are relics from the God Wars. Players cannot exchange the artefacts in noted form. In addition, Mandrith and Nastroth will not buy weapons or armour received as drops, as he advises the players to use them, rather than trade them for money.

This towering figure is descended from the first of the clans of men, whose legends speak of the first murder on RuneScape. For this crime, his people have been cursed to an eternity watching over those who would do the same. Given his terrifying dress, the massive blade he wields and his remarkable size, it is little wonder that he survived in the Wilderness. According to Mandrith his robes have been passed from father to son for generations. He appears to be equipped and skilled much like a player killer in old-style Wilderness: a fast and deadly weapon, with little armour, wild-looking and very strong without much dexterity abilities.

Mandrith used to be the custodian of the Wilderness Volcano when Bounty Hunter was hosted there (bullying his banker, Maximillian Sackville) constantly, but had to close it due to a particularly violent eruption. When various monsters moved into the crater Mandrith abandoned the volcano and moved to Edgeville.

According to Sanchez, when Mandrith was in the Wilderness, he hired Scotty and Sanchez to clean up for him, paying them 76k coins per hour.

After Ritual of the Mahjarrat, talking to him about the Dragonkin's attack on Edgeville will show that Mandrith helped people get to safety, and saw a myth. Upon telling them that they are dragonkin, he tells the adventurer to not say their name again or they will come back. This suggests that his people greatly fear the dragonkin.

Mandrith would later recruit the World Guardian in the Sixth Age to "rebuild" Edgeville from the Dragonkin attack, fearing that too much circulating rumors among the populace would cause them to come back again.

Retrieved from "https://runescape.fandom.com/wiki/Mandrith?oldid=25380352"
Community content is available under CC-BY-SA unless otherwise noted.