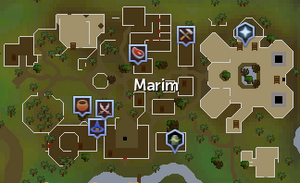 Click to enlarge
Marim is a village on Ape Atoll, inhabited by various monkeys who are ruled over by King Awowogei. It is only accessible to players who have partially or fully completed the Monkey Madness quest, and most of the quest takes place there. The village is most likely named after Marimbo, the monkey god. There are various shops and stalls around the village, including one of the only two places that sell dragon scimitars, the other one being Dealga's Scimitar Emporium in Varrock. At the south of Marim is the Ape Atoll Agility Course, which can only be used in ninja monkey form.

Marim is very dangerous to low-levelled players because of the aggressive, poisonous scorpions crawling around. There are also monkey archers situated at various locations that will shoot players if they see them, dealing high damage. However, players will be safe if they are wielding a Greegree. That said, the entire island is extremely volatile to most players if they are not using a greegree.

Marim is a prime location for training Strength, due to the fact that there is an altar in close proximity to Monkey Guards, allowing the use of higher level prayers without the need for prayer potions meaning a player can stay for long periods of time without the need of food. The Monkey Guards also regenerate health quite quickly and respawn relatively fast, allowing for very fast experience at higher levels. This method of training strength is especially useful using the Dharok's set, because players can remain low health with minimal fear of dying. This does however have its own problems, as the small spiders near the altar can poison which can lead to deaths of players remaining at low health. This can be negated with the use of an anti-poison totem, but as it is wielded in the shield slot, it cannot be used in conjunction with the Dharok's set. Alternatively, a prayer book may be in the inventory and can heal poison infinitely at the expense of prayer points which can be restored at the altar.

Marim is also a good location for training Thieving, as there are several monkey knife fighters in a building on the western side of the village. They can be pickpocketed from while in gorilla form during or after Do No Evil.

Retrieved from "https://runescape.fandom.com/wiki/Marim?oldid=24925951"
Community content is available under CC-BY-SA unless otherwise noted.