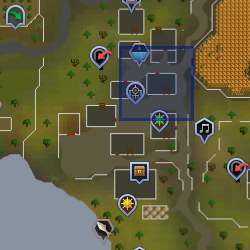 Maris is the wife of the Saradominist missionary Morgan. They recently moved to Draynor Village,[1] and have since been terrorised by the local vampyre Count Draynor.[2] Upon her husband's insistence, they have been searching for a Vampyre Slayer to deal with the Count.[3]

Morgan insists on keeping garlic close at hand, which displeases her as it makes him stink, so she hides it when she can.[4]

Retrieved from "https://runescape.fandom.com/wiki/Maris?oldid=24925809"
Community content is available under CC-BY-SA unless otherwise noted.