A rich businessman who thinks he's a warrior. 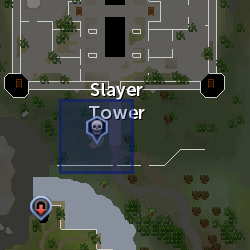 Markus is a wealthy Faladian entrepreneur who travelled to Morytania with the hopes of becoming a true hero. Fear of the country's inhabitants, however, makes this impossible. As such, he stands at the entrance to the fearsome Slayer Tower, a former fortress of the Zarosian General Viggora, to hire adventurers to kill monsters in the Tower for him so that he can pretend it was his work and make a name. Markus does this in the form of Slayer contracts, which reward experience or coins when completing them. He is satisfied with this, as creating an army of heroes would make him a hero as well.

Retrieved from "https://runescape.fandom.com/wiki/Markus?oldid=24925420"
Community content is available under CC-BY-SA unless otherwise noted.