He is trembling and covered in cuts and scrapes. 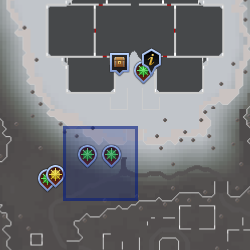 He is trembling, covered in cuts and scrapes, and wearing a festive hat.

Marmaros Thokson is a Fremennik warrior and the younger brother of the self-proclaimed master of Dungeoneering, Thok. He is found near the castle above Daemonheim, located south-west of the Fremennik banker and Dungeoneering tutor, and serves as a Rewards trader, trading Dungeoneering tokens for rewards, such as Chaotic equipment. He also offers to repair the degradable equipment he sells, which can be paid for with either coins or a combination of coins and tokens.

His knowledge of Daemonheim is shown throughout a series of letters written to Thok and his younger sister, Bryll. The letters were a method to keep his sanity while traversing the endless and nightmarish floors of Daemonheim, as well as hopefully record the progress their journey had accomplished for future study. Marmaros also named one of the types of ore he discovered in Daemonheim after himself and a type of clothing texture after his sister.

Marmaros continually commented on Thok's determination and ability to travel throughout the danger-filled dungeons in a way that suggested he himself did not share the same zeal. In one letter, Thok writes that Marmaros got stomped by a 'big stomp creature'. This refers to the dungeoneering boss Stomp; This has been proven in one of the Fremennik sagas, where the player plays Marmaros while he gets stomped. Thok likely wrote his letter this way due to his limited vocabulary, as demonstrated when talking to him, or in his response to a player's letter in Postbag from the Heim.

Marmaros was later attacked by the Hope devourer, which drained all of his hope and made him suicidal, which, coupled with the voices on the final floor, forced Thok to break his arms in order to prevent him from hurting himself.

If the player asks him about his name he will eventually say: "They called me Ma...", but is then interrupted by the player who guesses some names; he then realises he does not recall his own name.

During the 2010 Christmas event, Marmaros could be found at the Heimland Games, wearing a jester hat. The player could not claim rewards, only attempt to explain to him what Christmas is.

It is possible to receive parcels during Parcels from the Hedge delivered from Marmaros.

Marmaros, injured by Stomp
Click an image to enlarge

Retrieved from "https://runescape.fandom.com/wiki/Marmaros?oldid=26388084"
Community content is available under CC-BY-SA unless otherwise noted.