Start a Wiki
OS
This article is about the Farming cape seller. For others called Martin, see Martin.
Not to be confused with Master Farmer.

A master at gardening. 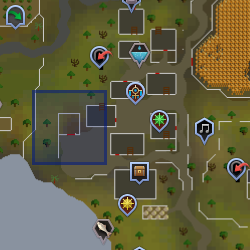 He can be pick-pocketed for seeds at level 38 Thieving. If players fail, he will say Cor blimey, mate! What are ye doing in me pockets?, and they will take a small amount of damage (varies depending on the player's current life points) and be stunned for 5 seconds.

Sometimes, Martin wanders into the pigpen, and the gate is closed by players. This traps him, and restricts his field of movement, thus making him easier to pickpocket. This also prevents the market guards from entering. Players may sell the seeds to Olivia after a certain time passed. In this case, Martin will stay in the pen until he is let out by a player, or a system update occurs. After a certain time, he will respawn outside the pen.[source needed]

During the quest series, players learn that Martin and several other gardeners are part of the Group of Advanced Gardeners. As gardeners, they tend to farming patches, and usually demand payment for their services.

During the quests Fairy Tale I - Growing Pains and Fairy Tale II - Cure a Queen, Martin features at the start of the quests. In Part 1, he talks about how none of his crops are growing, and requests the player to ask the other farmers why this is the case. After killing Tanglefoot, players will inform Martin that it would be okay to grow his crops.

In Part 2, Martin says that he is surprised that the player came to him after they had "apparently" lied to him about how the crops will grow.

After Part 3, players can unlock the ability to have their patches automatically weeded. In order to do so, they must talk to Martin the Master Gardener about "farming problems and fairies". Then, talk to a gardener at any one of their patches. The farming patches will then remain weed free. To disable it, just talk to any gardener. (When the Fairy Queen teleports the player to Martin near the end of the quest, talking to him ends the quest. Players then have to talk to him again, after the quest rewards, to unlock this ability. If any patch has preexisting weeds, they will have to be removed before this will take effect.)

Retrieved from "https://runescape.fandom.com/wiki/Martin_the_Master_Gardener?oldid=24924513"
Community content is available under CC-BY-SA unless otherwise noted.