Start a Wiki
RSCOS
For the title, see the Master Fisherman/Fisherwoman.

The man in charge of the fishing guild. 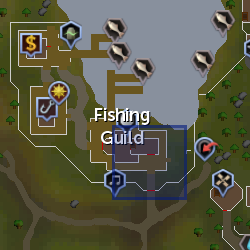 As the head of the guild, the master fisher watches the entrance to the guild to make sure that only players with at least level 68 in Fishing are allowed to enter. If a player with less than level 68 talks to him, he says: "Hello, I'm afraid only the top fishers are allowed to use our premier fishing facilities." This was added after his graphical rework on 23 March 2010.

The master fisher wears the Fishing cape, and sells this cape to players with level 99 in Fishing for 99,000 coins.

During Deadliest Catch, he directs players to Linza when asked where to find a master smith to make a giant harpoon, and must be pickpocketed to obtain a sea chart.

Retrieved from "https://runescape.fandom.com/wiki/Master_fisher?oldid=24922438"
Community content is available under CC-BY-SA unless otherwise noted.