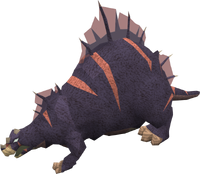 Mastices (or Mastyxes) are a race of unaggressive, slow, lizard like creatures similar in appearance to stegosaurus dinosaurs that dwell in all tunnels under Daemonheim. Their skin is sought after for making excellent Ranged armour. They can be killed, but are often caught with special Hunter traps, that cut off the mastyx's head when it takes an interest in the trap. For members with adequate Hunting levels, trapping them is generally advised, as it provides the player with about 2-4 hides, while killing it only yields 0-1 hide.

There are ten known species:

The Gluttonous behemoth eats from the corpse of a bovimastyx, which is a portmonteau of "bovine" and "mastyx", during the fight. It does not look like any of the other known mastices and as such appears to be a new species, which cannot be caught by players. Examining this carcass reveals a text of "You'd have to be really hungry to consider it."

However, it is believed by some players that "bovimastyx" is simply the collective name of the creatures.

With the proper Fletching and Hunter levels, a member can make a hunting trap and catch a mastyx. Traps are made out of different types of wood. Contrary to popular belief, higher tiers of wood are not required to catch higher tiered mastyx, it simply gives better odds at successfully catching them. Mastyx hides will be given as a result of catching a mastyx, which can be crafted into Ranged gear. It is possible that the mastyx destroys the trap, and so a new one must be made.

Retrieved from "https://runescape.fandom.com/wiki/Mastyx?oldid=24921528"
Community content is available under CC-BY-SA unless otherwise noted.